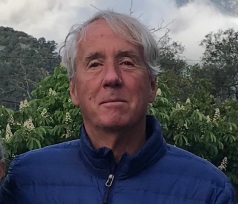 Mike Dillon lives in a small town on Puget Sound northwest of Seattle.

His most recent book is a chapbook, The Return, from Finishing Line Press (March 2021). British reviewer Matthew Paul, writing in The Sphinx, noted the author’s “succinct, imagistic skills” and “quiet, almost effortlessly-crafted poetry.”

He Looks Back from Old Age

The Parthenon failed.
Mother Goose failed.
And I failed my First Communion vows
with all those baroque words
between town and gown.

The Trojan Horse never fails.
Nor does Evil fail
to find the key to the reinforced door.
As the earth in its turning never fails
to stop a lowered coffin.

Our dream, my dear, never failed.
Nor did the sacrament of spring light
in our bedroom fail
where we made a world
from our dream.

Southwest
tonight’s storm doubled its fist
beyond the black
white-crested waves
aimed in our direction.

I gazed into the fixed, skyward eye,
where the pupil’s black sun
haloed by an orange corona
dropped into my eye
like a stone.

Past midnight. Our old house
creaks against the wind.
The tide below is furious and full.
I dig deeper down into my blankets.
And the black sun still follows.