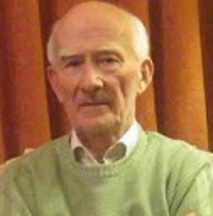 Matt Mooney. Born in Kilchreest, Co. Galway in 1943, he has lived in Listowel since 1966. His four collections of poems are: Droving (2003), Falling Apples (2010), Earth to Earth (2015) and The Singing Woods (2017). Winner of The Pádraig Liath Ó Conchubhair Award 2019. (Filíocht/Poetry). Poems published in: The Amaravati International Poetic Prism Anthology 2018, The Galway Review Anthologies, Feasta, First Cut, West 47, Duilleoga, Striking a Cord, The Applicant, Poetry Breakfast, Poems on the Edge. One of his poems appears on the syllabus of a number of UK Primary Schools. His poems have been read on: RTE Radio, Wired FM, Radio Kerry. 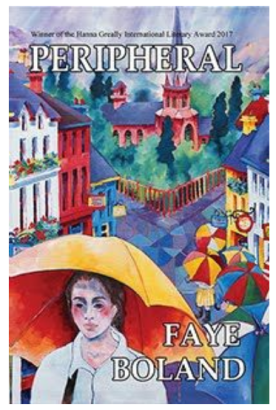 Peripheral by Faye Boland is a colourful and thought provoking cornucopia of poetic gems true to its eye catching cover design.
There is a good balance in the book between the light and shade of our lives. At the outset I’d like to give mention here that her poetic themes are so varied but in every case her causes are so worthy, her issues soundly researched and her subjects always well focussed. A case in point would be her poem ‘Heritage’:

There’s a terrible indictment and a sense of national self-created doom in the last line:

‘The bramble’s tentacles slither slowly over bricks and mortar’. Her consonant and vowel sounds in tandem ring out the bad news convincingly.

In what I would rate an arresting war poem ‘Perfectly Blue’ the poet quotes Lloyd George’s:

‘Never has the sky been more perfectly blue’

It’s a preamble poem about the First World War stating:

‘There is yet
no endless buzz of bullets’

She outlines in line after staccato line how it blew away everything good that one would expect under a clear blue sky. The last stanza nails down what the raw reality was about to be. A clever approach to enter into the realm of what might have been had reason prevailed.

‘No screams,
as young men’s limbs rip
from their bodies
as lives sink into mud.’

In these deeply thought out poems she sets out her stall of values and beliefs. Her heart is never spared in any of her emotionally underlined outpourings on people and places, neither is her sympathy and compassion for suffering humanity in cleverly crafted poems like ‘Prayer’ which concerns the desperate plight of refugees at the mercy of the high seas:

She spells out in no uncertain terms the raw truth of the utter desolation of the homeless referred to in an insistent way in a number of her poems as if she is crying out for them, entering into their impoverished lives. In ‘Snapshot’ she says:

‘Christmas shoppers shuttle past
the nameless homeless man,
inconsequential as a wrapper discarded
on the street.’

Still on this theme in the title poem ‘Peripheral’ she writes with the poor man on the side of the street doing the speaking:

‘I am empty on the edge

of danger, a genie
on a cardboard carpet.’

The final lines powerfully capture how a man like that must feel in his heart:

‘Hopeless, I dive
into the bottom

of a bottle, take comfort
in its warm glow.

That last line is one of the finest punch lines to a poem that I have seen. It would literally make you shiver.
She shows a striking empathy with others who emerge as subjects of her poetic focus. ‘Gorseland’ is a good example. It’s about a returned yank living with her husband and young family on the side of a mountain, as the title suggests, set sometime I would say back in the bad old fifties in Ireland:

‘Before fair day, she’d
scrub his pants and geansaí
on the washboard
with Sunlight soap,
pray he’d get a good price
for the sheep: enough to
buy shoes to keep the children’s
feet from blistering.’

She herself is not shy of the camera in the sense of exposing her own self image and her own vulnerability in matters of love and relationships. This is subtly illustrated in ‘My Shadow’ which has some very revealing inner observations. Speaking of her shadow she writes:

‘When I walk
it dogs my heels,
slows me down.

nags me with
doubts as I contrive
to succeed and, descending
stealthily like a smog,
obscures my purpose.’

‘Doppelganger’ is a different type of shadow, a shadow or kindred spirit that’s her perfect match. It could also be interpreted as her comfort zone. This is Faye Boland at her best. This poem is one of the most memorable in the book, mostly for the delicate lines of its composition. It shows an endearing and intriguing side to her, even in the very original title of the poem;

‘Doppleganger, my perfect match,
I long to roll into your springy softness,
feel your toes curling around mine.’

Still on this theme of the denouement of the poet’s personal take on herself in her poems we look at ‘First Flight’. Here we see her vulnerability that I have spoken about already:

‘Served by a beauty pageant
hostess, she sashays
through the cabin aisle
tries to comfort you, alone,
legs too short
to reach the cabin floor’

Her poem ‘Thumbs Up’, an all too fleeting romantic encounter, has a charm all of its own while at the same time contains some of her finest imagery:

‘My fingers move like ants:
I am going for a walk.
Then, grasshopper-quick,
I take off.’

In the finish, very self conscious, this electrically charged chance meeting renders her speechless:

‘So much to say
but I lack the tools
to convey what’s buried
beneath the surface:

Her strong maternal instinct and love of children from the moment of their birth come through in a number of poems but most notably in ‘Amphibian’ and ‘The Pirate’. She handles the subject so well that she captivates us, making us really feel the wonder and awe of birth and childhood and no little amusement in the case of ‘Pirate’ where she shows a fun loving approach to family life:

‘You picture yourself riding the waves
in a timber galleon. Torches blazing,
skull and crossbones waving,
sporting an eye patch, feathered hat,
cutlass in hand.’

Yet with all his veneer of toughness she has to take him to her ‘big warm bed’ when he has bad dreams at night as a result of all this pirating game. So true to life, her tenderness shining through at times like this.
In ‘Amphibian’, a word very apt in the situation’ she becomes informative to some of us less informed people in her use of the medical term ‘amniotic fluid’. We metaphorically swim into the world:

‘Amphibious from the moment
you swam from amniotic fluid
into the cradle of my arms,
gulped your first breath.’

She progresses from there to show magnificently the story of a young life in her description of him as a boatman out at sea:

‘in a wooden boat,
fronds of red hair
flapping in sea-spray.’

It’s all very symbolic of the earlier birth process:

‘and as it cuts
through salt water, I see you gliding
into your destiny.’

In the poem ‘In dependence’ we read some of her best lines about children. Her account of collecting her child from school both charms and surprises at the same time:

‘Excitement tumbles from your lips.
As you reach me you stop short of
the anticipated embrace, grab a friend.’

These poems clearly outline the poet’s ability to sustain the movement and imagery which is her hallmark.
There are so many aspects to this collection. There are many contrasts of moods and shades of colour.
Her ‘Little Maverick Hen’ is hilarious and it is one of the best depictions from an Animal Farm type of story land that I have come across.

‘Little maverick hen,
undersized but valiant
scorns the hens,
overfed and unintelligent.
She nests with the ducks,
gobbles their food,
unfazed by their filthy water.’

Yet there’s the dark side of life to be faced and it is well handled by Faye. Her ‘Oblation’ begins with the young man who is the subject of the poem acting the fool in a music class to his mad, wrecking behaviour in society, to him being destitute on the Kilburn High Road:

‘Your faculties scattered like seeds,
on the stony ground where you sat.’

The ending of his short and shocking life story is told in straightforward terms, as raw as was the act of his suicide, in the last two lines:

‘On the last day, you waded out of your depth,
offered yourself up.’

In ‘Sunday Lie-in’ we are in familiar territory – ‘loves old sweet song’. There is great sensuality and intimacy in her lines:

‘Your hand glides
over my hair;
fingertips trace the ridge
of my cheekbone’

Among her many poetic gifts I haven’t commented on so far is the power to share with us her love for nature and closeness to it. ‘Aberration’ a well crafted poem on city life versus country life:

‘I am at home in this place,
a theophany, pulsing slower
than a heartbeat.’

Even Wordsworth were he alive would envy those lines.

A word or two about Faye Boland’s closing poem ‘Homeward’. Here she confirms for us how well grounded she is as a Kerry woman as she takes us for a drive on the Kilgarvan road.

‘I turn on to the Kilgarvan road,
reception lost, the outside world cut off.’

We remember she spoke of having a talisman in the first poem ‘Bile’ in this book.

What waves her on in this the last poem? It is her very own special oak tree. She has a way of making ends meet in her subtle narrative style in which the titles are spelt out boldly:

‘The sacred oak leans towards me,
waves me on, past endless fir-forests,
arrow-head bristles’

We can almost smell the place she calls home, she makes it so real. She couldn’t have finished on a better note for me for I was a spellbound traveller with her throughout her eclectic and exciting first collection ‘Peripheral’. 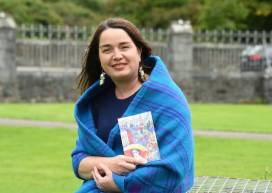 Faye Boland lives in Kenmare, Co.Kerry. Her work has been published in numerous literary magazines and journals. She has won the Robert Leslie Boland poetry prize 2018 and the Hanna Greally International Literary Award 2017. She was shortlisted in 2013 for the Poetry on the Lake XIII International Poetry Competition and was highly commended for a Kerry Literary Award (for fiction) in 2015. She is also a Volunteer Tutor on the Fighting Words Creative Writing Programme.