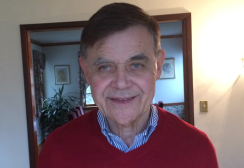 Robert Pelgrift is an editor for a legal publisher, working in New York City. His poems have been published in various anthologies and in The Lyric, Rotary Dial, The Galway Review, The Foxglove Journal and The Waggle.

Your Muse lives in the temple of your sense,
where dwells not that which is, but an idea
of it, your impression and its essence,
an idea of that which is, as it should be.

And there the swell of Autumn’s swollen gourd
will never wither, nor its bright hues fade;
nor harvest ever deplete Autumn’s hoard
of golden fruit and grain by your Muse made.

Your poem is true that is a true expression
of Autumn’s beauty, and beautiful the poem
that’s true, the true image of your impression,
that true essence made in your Muse’s home.

And true is Autumn’s yield that’s loosed from time,
caught ever in the beauty of your rhyme.

At last, you’ve yielded to my searching eye
the longed-for vision of each tiny gem
that on the night-blue field of moonless sky
so faintly marks your fragile jointed stem.

Often, I’ve drawn sight’s thread through the starred side
of the Great Bear to the North Star’s cold gleam,
but veiled have been your dim lights, the thread’s guide
to stitch your stem and cup from beam to beam.

This night, I first sense the paired lights that mark
your cup’s edge, then anticipation seems
to conjure your stem’s faint trace from the dark,
the glimmers of your long-imagined beams.

And now my eye will ever seek you here,
where your thread’s finely stitched on heaven’s blue sphere.

“A thing of beauty is a joy for ever.”
John Keats, “Endymion”

The hall is hushed, the choral voice is stilled,
then downward strokes the conductress’s wand;
and in a startled second, the hall’s filled
with choral voices raised in spellbound sound.

Her wand weaves tones together into song,
her lips describe the strains that rise and trill,
not from her, but out of the choral throng
whose soul is captive to the sorceress’s will.

Then, sweeter than the song, the sweetest strain
arises, fills the hall, then fills the heart,
with promised joy forever, then with pain
that its end is foretold by the songster’s art.

Then true to art, the sorceress’s wand strokes down;
and this sweet strain, this thing of beauty’s gone.