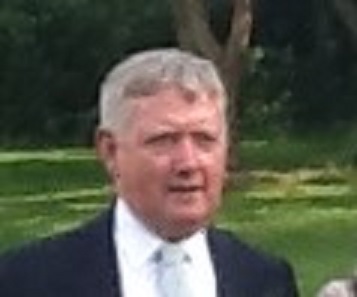 Pat J Mullan is originally from rural North Derry. He now lives in Eadestown near Naas in Co Kildare.  His short stories have been published in Spontaneity, The Galway Review, Paper Swans i-pamphlet The Incubator, Deep Water Literary Review, Shift Magazine and Word Bohemia. He was shortlisted for the Francis McManus Short Story Competition in 2015 and his entry was broadcast on RTE Radio 1.

It’s not as if I hadn’t given it a lot of thought since Catherine hinted at it that Saturday night in Fletchers.  I didn’t pay much attention at the time and I had the usual hangover on the Sunday that stops any kind of rational thought.

Then on the Monday, when I thought about what she had said, I began to wonder if this was what she had in mind.  She had been telling me about friends of hers at work who had finally got engaged.

As best I could recall her exact words were “About time too, he’s thirty eight and she’s pushing thirty-five. People should be well settled by the time they’re thirty-five.” Looking up, she sipped her gin and tonic and brushed the hair back over he left shoulder. Fletchers was packed with the usual weekend crowd. Still the best pints in the town, whatever about the service.

Initially I dismissed the idea. As the week went on I became convinced that it was. And by the following week I was getting enthused and excited about the idea.

I know we had only been going out together for just over seven months. But she was a looker and we got on really well. She was interested in walking too and most Saturdays we walked Punchestown racecourse, or along the canal.  She had asked me about going to one of the Canary Islands with her in January. But I hate lying in the sun. I still hadn’t given her an answer.

I started doing a bit of research on the cost – hard when you don’t want to give the game away, so I resorted to Google. I was shocked to find that guys were forking out between fifteen hundred and two grand for a ring. I’d have to wait on the next month’s milk cheque to cover that. But what was more disturbing was this stuff on-line about picking the right place to “pop the question”, as they put it.  All sorts of suggestions from renting an aeroplane to proposing on a beach in the Bahamas or at the Trevi Fountain in Rome. Then there was the flowers you were expected to produce, the fancy restaurant you absolutely had to bring her to and an engagement party with champagne, food and music. Normal people don’t do this, do they, just for an engagement?  But it did set me thinking. It was going to take more than one milk cheque to cover this. I reckoned three grand would just about get me out of it.

I soon got caught up in making plans. Bring her somewhere nice to propose– maybe the Phoenix Park or Punchestown. Get the flowers. Bring her to the Storehouse for a posh meal.  “Pop the question” and give her the ring during our walk. Maybe a small family party in the GAA a week or so after. Punchestown would be handier than the Phoenix Park, I thought, and we could make Fletchers after the meal for a couple of pints before closing. The last Saturday in October would be a good time.

The mother would be pleased. They got on well the couple of times I brought Catherine home for Sunday dinner. She was still talking about Catherine’s designer clothes and her higher executive job in the civil service.  And still harping about me buying wellingtons as a present for Catherine’s birthday in July and made me promise to consult before I bought anything for her for Christmas.

The first challenge for me was the ring. There’s no way I could go into Statham’s or McIntyre’s Jewellers in Naas. Somebody might see me. And it would be the same in Newbridge.  I’d have to have a look in Dublin –Grafton Street and Henry Street were the places for jewellers. I didn’t want to go into any of them. It felt as if I was buying drugs or something illegal.  I pushed open the door of Weir’s Jewellers on Grafton Street and ambled to the counter.

“I’m looking for an engagement ring,”

“Have you anything in particular in mind, sir?”

“What? I thought engagement rings were gold”

“Can I suggest a six point five sir and if it doesn’t fit we can exchange it? Best to bring the lady in to be sure.   Back in a moment.”

They all looked the same to me, but he went through each of them in detail. I told him I’d have a think about it.

I eventually bought a ring in Samuels just off Henry Street. I had learned a lot in Weirs and asked for a gold engagement ring under the two-grand mark.  I got a lovely ring for four hundred and eighty-five euro. didn’t look much different to the ones at four and five grand.

The Storehouse Restaurant was booked for eight, the flowers were ordered. I was picking Catherine up at four for our walk at Punchestown. There were a good few walking the racetrack when we got there with the bright late autumn sun low in the October sky shining directly on the parade ring and stand.  The trees were beginning to shed their multi-coloured leaves and the ground along the perimeter was covered with them.  It was going to be hard to get a moment of privacy, I thought.  So, we walked around the less travelled outer perimeter.

Catherine was her usual bubbly self, talking about her week at work, her granny in the nursing home and her little sister neglecting her studies. After several false starts and deep breaths, looking around to ensure the coast was clear, I finally got the courage to go down on one knee.  Catherine continued walking but eventually looked around.

“What are you doing, Paul, have you cramp in your leg or what?”

I fumbled in my pocket for the little box with the ring in it. I opened it and held it up muttering,

“Can we get married?”

“Oh. You bought a ring, did you? Without asking me?  And you picked it?  Well you can shove your bloody ring.”

“But…I mean, that night in Fletchers, you said…”

“I said what? And what night in Fletchers? Will you get up off the ground you bloody idiot, before somebody sees us?”

“You said people should be settled by the time they’re thirty-five.”

“You thought I was talking about us? I’m twenty-seven. We haven’t been going out six months, and you decided we’d get engaged.  And married.”  She stormed off.

Better cancel the Storehouse, I thought.  And the flowers. The ring was another matter. Maybe put it up on Done Deal?