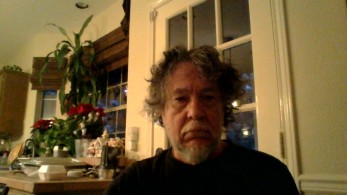 R. W. Haynes is Professor of English at Texas A&M International University, where he teaches early British literature and Shakespeare. His recent publications include studies of playwright/screenwriter Horton Foote. In 2016, Haynes received the SCMLA Poetry prize at the Dallas conference of the South Central Modern Language Association. Two books of his poems (Laredo Light and Let the Whales Escape) appeared in the summer of 2019.

Balladry called for here, boys; revere, Pablo,
The shining eyes of amorous Aphrodite,
And never think her a whit less than mighty.
Her evil eye, enraged, goes where you go,
Poisoning fantasy’s great urge to grow,
Sentencing you to sonnets forever in hell
Where ballads won’t flow, and comfort won’t swell,
And your Muse just shrugs and murmurs “No, No…”
You have to pause here, take off your hat,
A moment of silence for near devastation,
A reverent sign of your capitulation,
And hope the Snake Queen recognizes that.
Love is indispensable, her eyes insist,
And everyone will pay for the shot he missed.