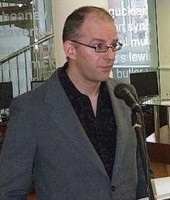 The island of me
has a changeable climate;
one day it’s sunny,
the next day it’s wet.

The rain can persist
for week upon week,
a dolorous mist
stretching from peak

of highest mountain
to low valley floor,
draping gray muslin
to every shore

leaving my cliffs
cold and morose
pondering what ifs
in seagullicose

wind-haunted silence,
until the next day
when the brightest of suns
lights up the bay.