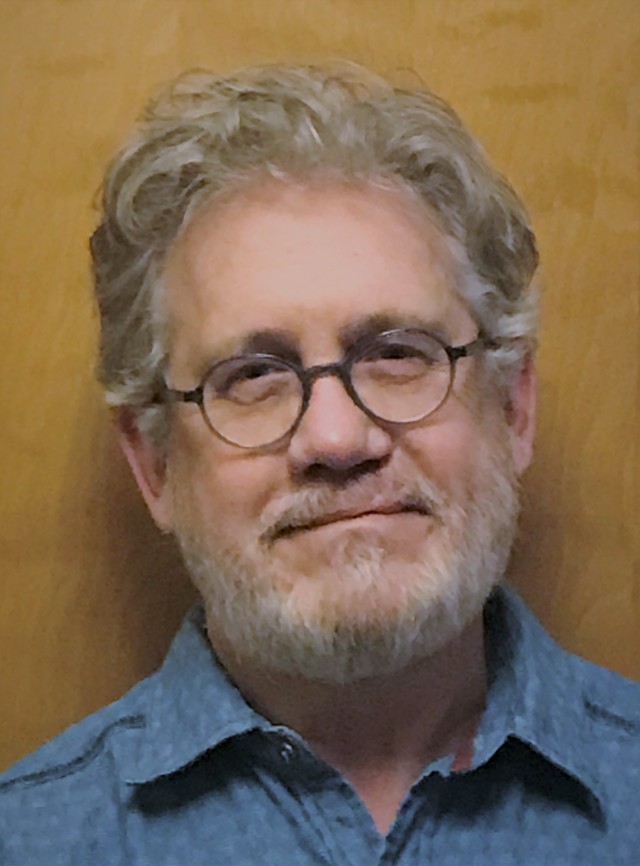 D. R. James’s latest of nine collections are Flip Requiem (Dos Madres Press, 2020), Surreal Expulsion (The Poetry Box, 2019), and If god were gentle (Dos Madres Press, 2017), and his micro-chapbook All Her Jazz is free, fun, and printable-for-folding at the Origami Poems Project. His prose and poems appear in a variety of anthologies and journals, including The Galway Review. James and his wife, psychotherapist Suzy Doyle, live in the woods near Saugatuck, Michigan, USA. https://www.amazon.com/author/drjamesauthorpage

It should’ve taken only that scouting,
squawking jay to get the word out.

Framed by a pane, on a perch,
he was posed, a post card, puffed

against the brittle cold. His stylish
scarf feathers flicked an impatient face,

and his scruffy topknot signaled
who knew who in the neighborhood:

some wirier guys to stir it up, to urge
the tiny silo to flowing so he could

swoop in, scoop out the run-off: “Anyone
game enough to give it a go?” But, no.

And now, not a single soul for supper.

Now if I had ambition I’d be
this kung fu squirrel, this lighter one,
this Jackie Chan, scaling stucco

to ledge to chimney to the hovering skid
of the evil whiz kid’s waffling chopper,
perpetual motion my only gear,

my sidekick wacky as this blacker one,
who tries but can’t quite nab his half
of the substantial stash. Their

choreography is manic, their fight scenes
replete with wall-walking, roof leaping,
jumps across gaps and gorges—all

their own improv’d stunts, every feat
a fleeting, one-take opportunity. It’s
those reflexes that make the difference:

my spindly claws and my mangy tail
spread like a shredded chute, a plea
for anyone at all to catch me. So,

I’ll leave these antics to my friends,
for today, the squirrels, until I can find
a way to foil them, deter them from

this wintertime welfare I’ve intended
for the birds, whose more manageable
business will give me the docile pleasure

I’ve been seeking: sitting here in a chair,
swathed in luscious listlessness, slinging
these escape lines toward anywhere I wish.

If ever a day so deceitful, so
promising in its delicate sunshine,
you’d stow all the wools and flannels, change out
screens for storms—the mud-framed sidewalks, matted
gardens so bathed in clemency you’d stamp
COMMUTED on the calendar and free
those squirmy inmates from their times-sevens
and prepositions to make a giddy
getaway into rumpus rooms of blue
and wispy white—today is just that day.

—first Published in Waymark: Voices of the Valley

Like the trusty railing, the congenial
patio table, the steady deck itself,
and every firm crotch
in every faithful tree, the feeder’s
become a sculpture.

I should have black and white to lace
into the camera to capture
this transubstantiation, this emergence
from the overnight dark and storm,
an aesthetic thing in itself,
dangling like an earring
from the gaunt lobe of a different day—
a white arrow, squirrel-emptied,
aimed straight for the flat sky.

The first little bird to find it, sunup,
can only inquire, perch
and jerk a nervous while,
then quickly move along
in wired hopes the other stops
around the circuit will service
his tiny entitlement, will be
scraped clean and waiting
like a retired guy’s double drive.

By tomorrow I know this wind
and another early thaw
will have de-transmorphed my feeder
to its manufactured purpose,
its slick roof and Plexiglass siding
once again resembling an urbane
enticement to things wild, to some
Nature available outside a backdoor slider.

And I know I’ll have also lost
more impetus for believing
in permanence—except
of the impermanent, its exceptional
knack for nourishing the dazzle
in this everyday desire.

—first published in From Whispers to Roars

This entry was posted in GR - 9 Print 2021, News, Poetry. Bookmark the permalink.