Susan Tepper is the author of nine published books of fiction and poetry. Her most recent titles are CONFESS a poetry chapbook (Cervena Barva Press, 2020) and the quirky road novel WHAT DRIVES MEN (Wilderness House Press, 2019). Tepper has received eighteen Pushcart Prize Nominations and other awards and honors. http://www.susantepper.com 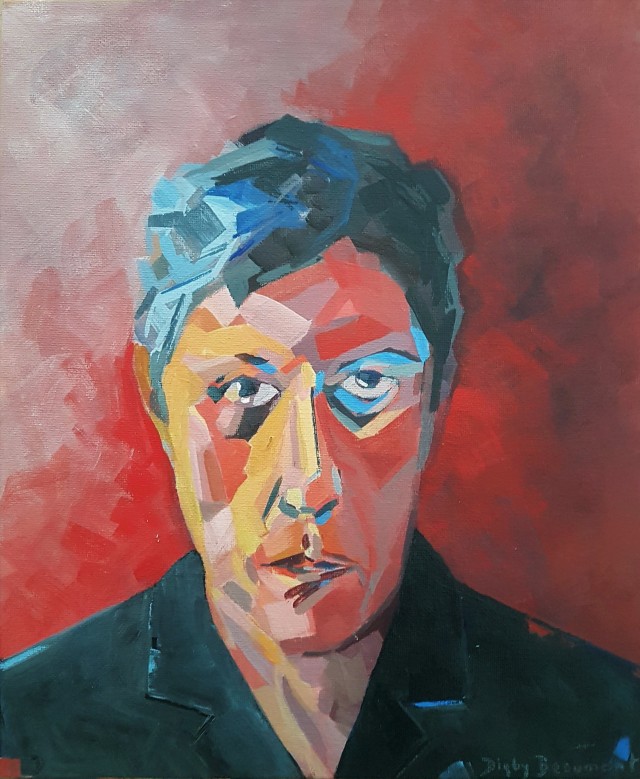 In graying light
of narrow entryway
bathroom and closet
one to a side
jingling coins in his pocket
he pauses to scan
hotel escape card
nailed to the door.
On hotel doors
throughout
the modern world;
millions of those things.
He laughs.
In case of fire.
Worse.
An irony.
He laughs again and
wipes his nose
with the back of his hand.
Doesn’t take generic
precaution seriously.
Gun cool against
his shin
it lies ready.

Just a wee lad when
he saw things breaking
heard the anguished cries
over all sorts—
some broken porcelain,
spoilt milk,
bairn still dripping
from out of his mother
flung against the hearth
by a drunken man.
The father. Raging.
No claim to a girl child.
This place of naked
pissing prisoners and
shit-smeared walls
can’t hold a candle.
Not to what he saw.
He would like his dark suit
back when his time is up.

Digby Beaumont is an artist and a writer. In his art, as in his writing, he is always exploring the idea of how best to produce some emotional response to the work He is a self-taught artist. An interview with him about his art plus a showcase of some of his portraiture feature in the November 2019 issue of the online journal, Tupelo Quarterly. As a short fiction writer his work has been published in numerous print and online literary journals and anthologies. His collection of flash fiction, one-page stories, Dancing Alone and Other Lessons, was released in early 2020. Digby has also published numerous English language textbooks with Heinemann and Macmillan, including international bestsellers. He lives by the seaside on the south coast of England. You can see more of his work on his website: https://digbybeaumont.com/