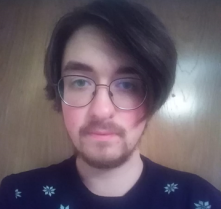 Ruairí Kennedy was born in London, and raised near Killarney, County Kerry for most of his childhood. He was awarded a BA in Ancient and Medieval History and Culture at Trinity College Dublin in 2016, and is currently pursuing an MA in Writing at NUIG. He has been writing for as long as he can remember, with a particular passion for fantasy and science fiction. He was encouraged to pursue his passion by his close friends, for whom he has been writing table-top adventure stories for the past seven years.

The Von Graf manse sat atop the tallest hill in the region, watching over the town of Nebelberg at its feet. Within its pale stone and mahogany walls lay rooms of ornament and splendour, watched over by gnarled marble guardians, carved to impress upon those beneath that they were glowering with vicious intent. The main halls and corridors sat oppressed by a malignant silence; no movement, words, or servants around to break the veil. The only noise at all in the building was to be found in the east wing dining hall; the awkward sounds of cutlery clinking across plates, dishes being moved, and slow chewing.

At either end of the dark oak dining table sat two women. Even to an outside observer, the fact that they were family was immediately clear; both sported cascading long and dark hair, pallid skin, and sharp emerald eyes. The older, and more graceful of the two, was staring at the younger lady with an unblinking fixation. “Eat your food, Francesca. It is unbecoming of a lady to play with their meal.” Francesca scowled; she hated cauliflower nearly as much as she hated stilted decorum. “Yes, mother” she obediently intoned, refusing to meet her mother’s gaze.

Francesca loathed these strained dinners with her mother. Perhaps it was due to how physically similar they looked, or maybe it was just her way, but Loretta felt the need to impress the airs and graces of the nobility upon her daughter. Francesca, however, just wanted to talk about her studies. Surgeries, cadavers, blood and bones, what makes the various races and people of Garthrand tick. Her mother tolerated the obsession to a certain degree; gone were the days when Loretta would confiscate her tomes and study materials. However, any talk of it at the table, or any mention of the possibility of attending the College of Healers on the eastern coast were out of the question; a taboo topic, and one that carried with it an oppressive weight on Francesca’s heart.

Francesca and Loretta’s lives were in a constant state of flux ever since Fran’s father, Christoph, had left on a ‘work trip’ three years back. To many in Nebelberg, Christoph was the Count in name alone; his cold disdain of the position, and his stalwart dedication to his personal work were not at all hidden. It was Christoph who had opened Francesca’s mind to the world of medicine. She caught herself smiling softly as she remembered sitting atop his bony, knobbled knee, as he lavished over an aged tome of cured leather and crinkled vellum. He had been pointing out the differences in anatomy across many of the races; how the elves’ musculature was taut, in order to waste less bodily space; how the dwarven respiratory system allowed for a greater intake of air, at the cost of thinner pulmonary walls; and how gnomish necks had adapted in order to bear the weight of their oversized craniums atop such mild frames.

Francesca’s reminiscence was shattered by a short cough from her mother, and the abrasive grating sound of wooden chair legs being dragged across the cobblestone floor. Loretta rose daintily to her feet; every movement she made had to be oh-so graceful, Francesca mulled to herself with a twinge of venom. Bringing with her a small candle, Loretta moved to leave the room, gliding across the cobblestones with such effortless finesse that one might forget she was merely walking. As she reached the doorframe, a gaping mouth in the wall, about to swallow her into the darkness of the hall beyond, she stopped and turned to Francesca. “Tomorrow, we will continue your lessons on courtroom etiquette and mannerisms.” Francesca stubbornly refused to meet her eyes, and instead focussed her attention on eviscerating the cauliflower beneath her fork. “And if you don’t finish your dinner…there will be consequence.” The threat hung over room for a brief moment; no details were given of what ‘consequence’ might entail, which caused Francesca to feel an intense unease.

Francesca felt a surge of bubbling rage within. The dinners, the lessons, the estate…even the Crow-damned conversations, she hated it all. Whipping around in her chair, finally ready to meet her mother’s judgemental stare, to spit insults and vitriol, she realised that her mother had left the room, having not deigned to even hear her beloved daughter’s response. With a wordless shout of disgust, Francesca shoved her plate across the long table; it slid with a reckless speed until it collided with another, toppling and clattering to the floor, spilling the bilious white mush that was once her dinner across the table and floor. She pondered wryly to herself if this counted as finishing her dinner. Not for the first time in the past few months, Francesca gathered together her cumbersome and suffocating habiliment and withdrew to the hall. Compared to her mother, her movements were oft likened to that of an ox, so as she ascended the curved staircase in the inky blackness of the main hall, she made sure to hammer her feet down on the wood, the plods and clods splitting the silence in order to spite Loretta.

She threw the doors open to her room, a macabre affair of black satin curtains, grim tapestries depicting beasts and monsters and wild hunts, and a rusty and matted carpet, flushed in a nearly bloodstained hue. Francesca enjoyed decorating her room in such a way; not only did it speak to her own tastes, but each rebellious choice of colour or decoration spat in the face of her mother and her traditions. Slumping into her chair, sitting at the head of a chaotically looked after desk, she considered attempting to drown herself in her studies as she did most nights. But she had hit a wall recently; there was only so much one could learn from texts and tomes, manuscripts and medical reports. She needed experience, practical training, if she was ever to become an effective healer. Shoving aside a pile of messy and disorganised notes, to clear herself some space, Francesca found herself face to face with the poster.

Of all of her scraps of parchment and paper, the poster remained pristine and untouched; at each of its four corners she had nailed it to the desk, to prevent her mother or one of the servants from throwing it out. It was a call for work for adventurers, by a man whom had made contact with her family due to her father’s fame in the world of doctors. His name was William Delaqua, and whilst it wasn’t detailed on the poster, she knew him to be the manservant of Count Feryn Ironfeld, the current steward to the Empty Throne. Why in Garthrand a man in such a position would need to call for the aid of mercenaries and sellswords, she could not quite fathom. Francesca stared at the scrap of paper for quite some time; she had already run through her planned flight from home in her mind several times. Of course, it would be difficult to get accepted as a qualified doctor for such work; but, with the Von Graf familial signet ring, and perhaps a mask to hide her identity, she may be able to pass herself off as her father to a stranger…maybe. Pulling open the drawer under the table, she stared down at the ornate bronze beak and mask within, attached to an ebony cowl of ruffled crow feathers. A plague doctor…how delightfully lower class an idea.