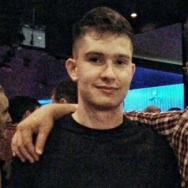 Féilim James is a writer from Dublin. His poetry and prose through both English and Irish have earned a number of awards and publications. Journals which have published Féilim’s writing include A New Ulster, Icarus, Trinity Journal of Literary Translation, and Comhar. His work through Irish (under Féilim Ó Brádaigh) has won seven Oireachtas literary awards. Additionally, he has twice been selected for Fóras na Gaeilge’s Tutor Scheme. Féilim is a graduate of English Literature and Psychology in Trinity College, Dublin, and is currently undertaking NUI Galway’s MA in Writing. View his website here: http://feilimwrites.com/

Here it comes, drifting in,
The world without illumined.

The crinkles on the lampshade are
The scribblings of a god.

And the murmur-drum of the city
Is the song of a river nearing its sea.

These impressions rub noses,
Begin to form a chain –

Till it goes again. Drifts away.

Time passes as loudly as storms.

A View of Troy

He strides the water’s edge.
All’s edge.
Surveys
The slope of golden sand,
The walls of the unbroken city.

That climb the sombre stone,
Built on the buried bone
Of all who came before.
Permanence etched
On its formless visage,

Now faced with a countenance
Wrought with passion.
He moves.
Gaze unbroken.
Eyes fixed on the walls.

Bare feet kissing the beach –
Heavy kisses, raw
As those that lace his nights,
That press the delicate skin of the breast,
Or the bark-rough jaw, the stone-firm chest,

Firm as the bulk of Troy,
A trophy in the eye
Of the watcher,
Rage-bent dreamer,
Envisioning immensity between his fingers.

As though propelled by the wine-dark waves
That encroach with gentle whispers
Of distant, deathless futures,
And kiss the naked heel
Of the watcher, cloaked in sun.