Frank McGuinness – The Woodcutter and His Family 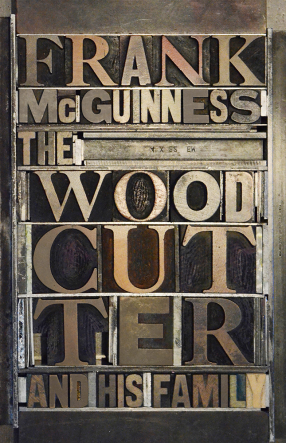 The Woodcutter and His Family

Also available as an ebook

It has the texture of a masterwork – uncompromising, adroit, properly audacious, the offspring of a radiant curiosity.

The World War intensifies in Europe. A writer breathes his last, imagining his life till now from his childhood in Dublin. The voices of his family circling him – wife, son, daughter – carry him to his end as he hears each separate chapter chronicling the power of their passion for their famous father, their love, their hate, their need, their sorrows and joys, their strangeness.

And James Joyce has saved for them one last story to delight and defy them – ‘The Woodcutter and His Family’.

In his new novel, writer and playwright Frank McGuinness reflects on how the intense obsessions of a major literary figure might affect his own life and that of his family, especially his children.

This is a brave work exploring the imagined last moments of James Joyce, his thoughts and those of his family as he slips away from them. Each has a chapter – the son, the mother, daughter, the man himself.

And what is Joyce’s last story for his family? How does he summon their attention to his life’s work, his life as lived, imagined, explored? This is Joyce’s world imagined in those moments between life and death when all that’s left is honesty.

Frank McGuinness is Professor of Creative Writing at University College Dublin. A world-renowned, award-winning playwright, his first great stage hit was the highly acclaimed Observe the Sons of Ulster Marching Towards the Somme. His other plays include The Factory Girls, Innocence, Carthaginians, Someone Who’ll Watch over Me, Dolly West’s Kitchen and many more. His adaptations of classic plays include Lorca’s Yerma; Chekhov’s Three Sisters and Uncle Vanya; Brecht’s The Threepenny Opera and The Caucasian Chalk Circle; Ibsen’s Hedda Gabler, A Doll’s House, Peer Gynt, The Lady from the Sea, John Gabriel Borkman, Ghosts, The Wild Duck and Rosmersholm; Strindberg’s Miss Julie; Euripides’ Hecuba and Helen; Racine’s Phaedra; and dramatisations of James Joyce’s The Dead and Du Maurier’s Rebecca. His television screenplays include Scout, The Hen House, Talk of Angels, Dancing at Lughnasa, A Short Stay in Switzerland and A Song for Jenny.

His first novel, Arimathea, was published by Brandon/O’Brien Press in 2013.

The Woodcutter and His Family will be published on 18th September

This entry was posted in Fiction, News, Review. Bookmark the permalink.
Loading Comments...