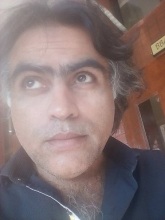 Rizwan Akhtar works as an Assistant Professor in the Department of English, Punjab University, Lahore, Pakistan. He completed his PhD in postcolonial literature from the University of Essex, UK in 2013. He has published poems in well-established poetry magazines of the UK, US, India, Canada, and New Zealand. He has also done a 5 weeks workshop on poetry with Derek Walcott at the University of Essex in 2010.

burrowing anxiety of affluence
and a silence too unadultrated

a sea-smelling evening waits on cobbled path
outside queen’s palace, I take off my jacket

I am reminded of people making love
homes and safer ends.

Cramping laps in corners two women lean
elbows chafe finger-tips fudge
baiting words for ambushed mouths
blush under a crust of smiles
may it be a bird or an untamed thought
beyond drastic boundary of reason
fantasy of sleeping in velvety beds
with brawny hermaphrodites
broad-chested hairy embraces
hedging poetic analogies but their intentions
are camouflaged by daily din of jobs
to earn a modest bread, a room in the city
and a view for arms to entangle when
no one comes to sleep over cushioned backs
Eros dies day by day blinking eyes
inside pillows and in nooks where they float
tabooed resumes of a life fiddling endlessly
plans of hording men over a steamy coffee
or sly interpretation of Adrienne Rich
and Carol and Duffy—Medusa & Mrs. Havisham—
cheat verses impersonate muse
to shape their versions of love
and the city says “ two women in corner are
like delayed fates” coiled by a will and a diction
hidden in bloused desires and armpits
marking everyone with their language.

in dim freckling, her pure lips pout. The world
is heavier with her flowery complexion, dust-like

she meets in invisible hours huffing into departures
miserable beloved. I stay content with previous language

remain vigilant with my head on her pillowed presence
midnight, sick with the idea of delaying revision

You are my shadow and see how we cancel each other.
Night on wet bed-sheets days on dreamy benches

punished for fingers transgressing your breasts
love, an inclination to intrude and steal inclusive

Would I write for you? Both forever and never
It would be like saying expression is blasphemous

I have loved the sacred crusts of your forgetfulness
concerns consumed so many words unedited,

and a guilt of consigning you to a world amazed
at its creation. Now the rain is finishing you.