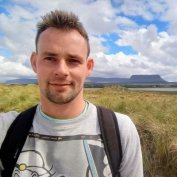 Ciarán O’Rourke lives in Galway. His first collection, The Buried Breath, was highly commended by the Forward Foundation for Poetry in 2019.

His second collection, Phantom Gang, is published in May 2022 by The Irish Pages Press.

I remember, after everything, older than before,
in loneliness, the both of them, heart-weary,
as they drew their son away, the disenchanted
visionary, a still-ebullient boy at heart,
his wounded carcass draping now
across a pony-drag two nodding horses towed:
our mutilated prophet, his parents’ single child,
dispatched. I can see him living clearly
in my mind. When the storm of vision drops
like this, and lifts again, the murdered world itself,
for all our grief, seems greener: the spring
of second sight unfolding cleanly, like a rain.
Later, the famed, metallic service-men –
you know their kind – came with carnage
on a winter’s day, the weather fresh,
a deep sun shining out, as they hunted
through the valley, humming songs.
We fought them, flailing in the volleys
as we fell. The wind rose after, dreaming night,
a deathly blizzard forming in its wake: the snow-drifts
whispered through the gully, gathering in banks
around the crooked heaps of children broken down
by bullets as they ran; the women, too, ripped through
and going grey, their butchered bodies hillocks in the snow.
Mark it down. But also: that the vision carries on.
It’s in the cloudiness of sight alone
we stumble from the way. All, vividly collected
or brutally effaced, is vision, only vision, in the end.

Reddish black, and violet! Tell me more:
about the lovely berry-bunch you picked
in Steglitz Park, the black, perhaps,
the elder berry, which hangs in thick
and heavy clusters, fanning down,
and the violet – it must have been
the common medlar, properly
a crushing red, but, at this late time
of year, too ripe, begun to rot, a violet tinge,
and leaves, no doubt, like myrtle,
punctiliously green, a leather-like
top-surface, rough beneath.
Oh, tell me more! In the courtyard
where I pace, the daily army trucks
arrive, piled up with haversacks
and tunics, from the front, a ragged war,
the bundles stiff with blood. The women here,
each waiting in her cell, together take
the tarnished fabrics, mend them all,
then send the back, repaired, for future use.
Last week, a truck came, slowly dragged
by buffaloes, not horses… I never saw
such creatures, close enough to touch!
Black and bulky, mythic things, they peered
across the yard, big-eyed and ever-softening:
war trophies from Romania, the soldier said,
difficult to snare, these animals, so fierce
was their accustomed life, so lush, a flowing green,
their original terrain. They were, and had
been since their capture, mercilessly flogged,
the wildness beaten out, then yoked
to heavy loads (he grinned) and quickly
worked to death. You know, their gleaming hide
is near-proverbially tough – but the whip
had left a web. They stood, the buffaloes,
in stillness, dripping tiny droplets
on the stones; the one in front
looked like a weeping child, severely
thrashed about the head, who cannot know
the why, nor how to slip away, the sheer
unending torture all there is. I went before him,
watched his pooling pupils sink, and thought,
with him, somehow, of deep Romania,
the meadows long ago, an easy
breath of wind, a distant dream (or
memory) to wash away the agony
of now, the broken blood that trickled
down his back. I reached a single finger
to his neck, and heard the ebb. When asked,
the soldier smiled again, and said,
the whipping stick a-dangle at his side:
nobody feels compassion, not today,
not even fellow men for men –
and nothing for the beasts.

Concerning the Conditions of the Working Poor

A two-hundred-thousand mass – and what a mass!
Bare women, ruddy men, with nothing left, completely
clad in rags: living proletarians,
and more – of Ireland, each and all, feral,
fierce, fanatic Gaels… give me
two hundred thousand of such stock
and we could overthrow the monarchy tomorrow!
Hunger drives them here, to ice-cold,
mechanised, fair England’s halls:
in the brutal hurly-burly of the factories
their restiveness takes root: they squander
what they earn, then starve until
the next pay-day, on less and less, too much
accustomed (never reconciled)
to the pang between their ribs. All this
brings out the wayward contradictions
of the age, and in their nature: dissonant
and dumb, low-simmering in rage, they lash back
blindly at the great metropolis, the savageries
they bear, thirsting always for revenge –
these poorest of the poor, slum-
wracked and huddled with the dregs.
At home, meanwhile, among
the waste, abandoned fields, the ruins
grow like weeds, medieval churches,
ancient megaliths, and farther west,
the stony huts of peasants, rotting in the rain,
famine planted like a palsy
across the stunted hills. Beyond
these shrunken villages, long avenues of loss,
a splendid greenery survives – on lawns
the leisured landlords keep in fine repair.
We find, in this, a monstrous iteration
of imperial excess! But the rising,
beggared people see it plain: a plunder-
loving caste, or nation, built
on human dispossession, forges its own chains.