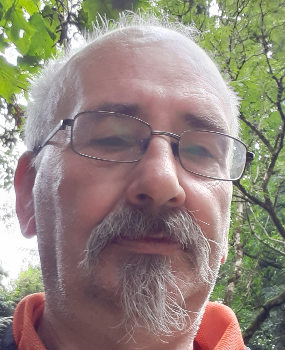 Gordon Ferris was born and raised in Finglas, a North West suburb of Dublin. In the early eighties, he moved to Donegal where he has lived ever since. He started writing in 2014 and has had many short stories and poems in publications including Hidden Channel, A New Ulster, The Galway Review, Impspired Magazine, and Lothlorien Poetry Journal. He has also won prizes in the summer 2020  HITA Creative Writing Competition for his poem ‘Mother’, and won the winter competition for his poem ‘The Silence’.  Gordon was awarded a Poetry Town Bursary by Poetry Ireland.

its consequence, a price you gladly paid
though the heart is hurt you never sway
in every choice you never made

the outcome is your dreams are made
and in another place, they play
if every choice you never made

So, we sit here
waiting for the
head to pop
around the corner
for the light
to re-emerge
for life to begin anew.
On the windshield
a fly lands
you look closely
to make sure there
is no miniature head
before you swot it
you look beyond the houses
to the hills and trees
to green and brown of nature
where you long to be
you ponder
on past times
easy faces
familiar
unafraid