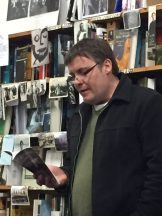 Christopher Palmer lives in Canberra, Australia, but would like to spend time in Galway, near the birthplace of his ancestors. His poetry has been published in Australian Poetry Journal, Bosphorus Review of Books, The Brasilia Review, London Grip, Shot Glass Journal, and The Weekend Australian, among others. His first collection Afterlives was published by Ginninderra Press in 2016.

The spider on the ceiling

I watched it over three days
following it along the cornice work
never moving, but having moved, each day.

By the fourth day it had turned
perhaps having mapped its world
now assessing how far it had come
or surveying the way home.

By the fifth day it was gone
the ceiling whiter for its sudden absence
the thread broken, leaving me alone
interrupting the wall’s neat lines

for whoever’s watching my path
marking my progress, each tiny step
until I too vanish.

We’d drive for hours, quiet spectators
of landscapes boasting in green;
towns in their slow cycle of ruin and renewal
and villages no more than a car-length
with their otherworldly names: Ravenscar,
Llantwit Major, Druidston Haven.

Pick-up time arranged, you’d leave me
to a boy’s growing sense of the day; no plan
but an urgency reaching down to low tide
as far as the headland
filling my nose and clothes and hair
with the scent of iron, damp sand and salt
and later the house, when I’d empty bag loads
onto the kitchen table for analysis
and baking in the oven.

But for now, all my future
was marls and crags, shales and clays
the thin bed of dark pebbles full of sharks’ teeth
high on the cliff face, revealed
with chisels, picks, and a lack of fear;
like the horses we’d see along the way
etched into existence, whiter than bone.

Zigzagging the intertidal
I’d chase signatures of the long-absent
until teased by seaweed, showered in foam.
Then you’d return
a sudden foreground in the eroded afternoon
lost to time
and I’d look up from a bed of my own footprints
to layers I could see but never reach.