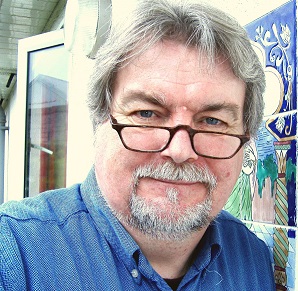 Fred Johnston  is an Irish poet, novelist, literary critic and musician. He is the founder and current director of the Western Writers’ Centre in Galway. He co-founded the Irish Writers’ Co-operative in 1974, and founded Galway’s annual Cúirt International Festival of Literature in 1986. His Recent work has appeared in The Spectator, The New Statesman, STAND, and on RTE’s ‘Arena.’ His most recent collection is ‘Alligator Days’ (Revival Press) and he is working on a translation of Béroul’s prose edition of ‘Tristan et Iseut.’

ground out by gears many earths deep
which is the turning of the world also, the unheard
engine at the core; it could be we have not travelled –

this is not taught in schools, the possibility
of infinite deceit, the physics of the perpetual lie:
and the calculus of the lie in motion is immeasurable

a number without numbers; even as the bridges
and walkways tick over us,
a clock’s sound, the sound of a clock’s hands in mechanical motion.