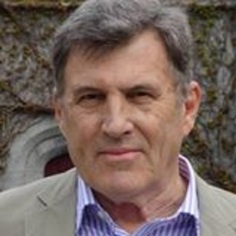 David Rigsbee is an American poet, the author of 11 collections of poems, including This Much I Can Tell You (Black Lawrence Press, forthcoming 2017) and Dream Baby (Lapwing Publications, Belfast forthcoming 2017). He is the winner of a Pushcart Prize, two National Endowment for the Arts literary fellowships, and an Award from the Academy of American Poets. He has recently completed a translation of Dante’s Paradiso, and has published a book of criticism, Not Alone in My Dancing: Essays and Reviews (Black Lawrence Press, 2016). He lives outside New York and is contributing editor for The Cortland Review.

A covey of burqas goes by the laundry,
travel agent, and bar; babies roll along,
concealed in layers in strollers.
Men clustered, the conversation,
whether sports or politics, serious.
Russians stare at the Greeks
and the Greeks stare back at the Russians,
no suspicion, no swapping talk, either.
It’s the ultimate, isn’t it?
How in this weather, the individual
man shears off from the collective,
and the collective must only wait
a short length to find him again,
that individual now coming up the block,
flushed, cap askew. Where was he?
Someplace where the shadow hesitated,
no doubt. Immigrants in eddies,
a buttery sunlight in a world of sorrow.
I have often thought I should turn from the world
to live in the poem, like the man in the tree
who pulls the ladder up after him,
as if to wed the anonymous and the personal
among the leaves, the clattering branches,
there in the wild perfection of the tree.
Or to stand suddenly among set pieces
and floor exercises, imagining how it will be
not to move, a squirrel on the forest floor
betraying presence with an uncontrollable flick,
while the spirit he remembers moves
by his immobile face in the form of a breeze.
Of my bona fides let it be said,
it was only the life I wouldn’t possess,
or that wouldn’t own me, that was
my text. Now I forage for the key:
the square or the round? I forget.
Like an acorn or a booster falling away,
even the Beloved, who in my dreams
made care a spotted fruit and death
a feather: reduced to a period.
A man raps inaudibly on the door.
The light in the upstairs window
is small, but it covers everything.

The upper porch is rickety and could come loose
at any time. A black mud dauber
lands on a square of sunlight, flits and rotates
for a moment on a two-by-four, then is gone.
Nervous sleep and day demanding: Diesels
hum between some trees and the hot sky,
which has dismissed any chatter of clouds.
An old gray cat, like the past, drags its long tail
through the gravel. Shadows move across the siding
like Plato’s cave where he sits, perched. Without being
there, he knows what the river is doing:
it’s the same thing that marks the appearance
of the creatures: groundhog, skunk, a nearly invisible fawn
he spotted between the woods and the road
when he came down the mountain, seeds wandering, falling
like cotton from the tall trees. They were en route,
happy enough to be blind in the landing, just as the trees
shook them off indifferently. He could draw
the lesson, but in his singularity, does not.
Better to end on the images, as the poet said, let them form
from the void, take whatever shape is theirs,
and as the old masters of figure and ground did, go from that.

Let me begin by telling you
how the oriole lit for a moment on the power line
as I sat, in thought, on my balcony perch
and fed myself with books, sentence after sentence,
above the ground squirrels, above the dogwood’s reply
to the fleur-de-lys, above the hop and blink
that goes by unseen under the leaves.
I read word by word, syllable by syllable,
letters like wooden Hessians on a calliope lost at sea,
on their voyage from the Old World,
expressionless and yet expressive,
sinking in their stiff uniforms, bottle-straight, simple.
When I looked up, it was gone, the wire
still rocking as if it had made a musical note
on behalf of its player, a common bird
who made his own song in another forest.