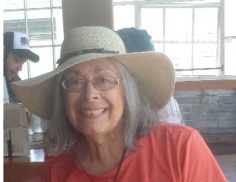 Katacha Díaz lives and writes in a quaint little historic town at the mouth of the Columbia River in the Pacific Northwest. Among the children’s books she has authored is Badger at Sandy Ridge Road for the Smithsonian Institution’s Backyard series. Her work has appeared or is forthcoming in The MacGuffin, New Mexico Review, Skipping Stones, The Galway Review, Route 7 Review, Coastlines, Gravel, Twisted Vine, Foliate Oak, and elsewhere.

It’s been a hectic day. My friend Celia suggests we treat ourselves to dinner out. So we trek down the hill to Astoria Coffeehouse & Bistro, a casual European style bistro with a great vibe. They have a Monday martini and sushi special that is a favorite with the local gastronomic aficionados.

It is busy inside. The cozy living-room-like lobby area is buzzing with the voices of men and women dressed in casual Pacific Northwest (PNW) attire – khakis, jeans, plaid shirts and colored t-shirts underneath – waiting for the hostess to seat them as soon as a table becomes available. Celia is a regular at the Bistro and knows everyone. There are no tables available, so we sit at the restaurant bar. We place our sushi order and wait for the bartender.

“Wine is usually her first choice,” Celia tells Cory, the seasoned bartender and cocktail pro, “but she may join me and try one of your martinis tonight.”

When I think about martinis, I associate the elegant cocktail with the brilliantly witty Dorothy Parker and the 10-year lunch bunch group of writers of the Algonquin Round Table. I picture them sipping quality spirits with appropriate garnish in, of course, stunning Art Deco martini glasses.

He smiles, nods, and pours spirits in the stainless steel shaker, and gives the cocktail a shake.

So, what makes Cory’s martinis the best in our quaint little historic town at the mouth of the Columbia River? Is it the high-end spirits? My curiosity is piqued; I closely watch Astoria’s bartender extraordinaire with the cocktail shaker in action.

Cory delivers signature martini cocktail in an elegant chilled glass. I take a sip of the shaken, not stirred martini – a la James Bond; it’s crisp and cold with a silky-smooth finish.

“What do you think?” asks Celia.

“Yup! And it’s best to sip – savoring slowly, that is,” says Celia, smiling at me conspiratorially.

Servers deliver trays of elegant and artfully arranged slices of colorful sushi rolls, spicy wasabe, slices of pickled ginger, and chopsticks. Martini and sushi is an interesting pairing. It’s not for everyone, but for the sophisticated palate, a savory and delightful treat for the senses.

During a trip home to Peru, to visit my grandmother and family, Mamama shared reminisces about a musical evening at Teatro Amazonas, The Amazon Theatre, in Manaus, Brazil. I was totally captivated with Mamama’s story about the Renaissance style architecture opera house built in a muggy and grimy Third World river town during the rubber boom days from materials and labor mostly imported from Europe, and no expense was spared.

I don’t know why I felt this way. Perhaps my excitement had to do with our upcoming trip to spend the holidays with my husband’s brother and family in Belém, the Brazilian city at the mouth of Amazon. Or perhaps it had to do with the prospect of extending our trip to visit the river city in the heart of the Amazon jungle with 19th century architecture and the opera house inspired by the Belle Époque period.

On a sultry New Year’s afternoon in Belém my husband and I said our good-byes to his brother and family, and boarded a non-stop 2-hour flight to Manaus. It was a picture-perfect day. From above, the world’s largest tropical rainforest, world renowned for its huge biodiversity, looked like a big, green sea with the mighty Amazon River waters rushing and a myriad of streams and rivers crisscrossing. The scenery en route was breathtakingly beautiful.

I had for weeks imagined my first day in the middle of the Amazon wilderness and in the heart of the city surrounded by the river. Since it was early afternoon when we checked-in at our hotel, we dropped off our luggage in our spacious room with a lovely view of the river. We walked along the cobblestone streets and made our way to the port where there was a flurry of activity with ships loading and unloading passengers and cargo. The popular Río Negro river market was swarming with people, booths, tables, carts, vintage rusty pick-up trucks and jeeps, and open-air boats with colorful hammocks selling fish, livestock, produce, herbs, strange and exotic plants and potions, live lizards and snakes, and an array of utensils and tools.

Walking along the city’s riverfront, I thought about my grandparents and their four young children who had lived in Iquitos, the capital of the Peruvian Amazon region, in the 1920s. The family, Mamama shared, had traveled by ship from Iquitos down the Amazon River to Manaus, the Brazilian river city in the heart of the jungle, where Papapa, my grandfather was on official government business.

My grandparents were guests of the governor of Amazonas. They arrived at the opulent pink and white opera house in chauffeured car before the appointed 8 p.m. curtain time. Tuxedos, silk gowns, pearls, glitzy jewels, furs and long white kid leather gloves were de rigueur evening wear.

During an intermission, my grandparents were escorted from their box seats to the frescoed “Noble Salon” where they took refreshments under the glow of Murano glass chandeliers. Waiters in formal attire and white gloves circulated with sterling silver trays of French Champagne and Scotch whiskey.

Mamama smiled and said, “It was an elegant and enchanting evening in the dazzling little jewel tucked away in the heart of the Amazon jungle!”

Early the next morning, my husband and I strolled to the main square in old town Manaus for a private behind-the-scenes tour of Teatro Amazonas, a working historical landmark and the main artistic and cultural patrimony of Amazonas state. Although the opera house had fallen into disrepair years earlier, it had recently undergone an $8 million dollar extensive restoration, including an air-conditioned theater, new lighting, sound system and dressing rooms. Our guide gave us a wonderful and informative tour of the building and small museum. It was surreal seeing the theater’s newly upholstered red velvet chairs in the lavish box seats, and standing under the brilliant lights of the Italian crystal chandelier in the “Noble Salon” where my grandparents had taken refreshments during that special musical evening back in the 1920s.

It was time for us to go and catch our plane. I looked behind and took one last look at the pink and white European-influenced eclectic architecture opera house with 36,000 ceramic tiles decorated in the colors of the national flag covering its dome.

When we returned back home to the States, I called Mamama in Peru to express my gratitude for an unforgettable story that led to epic travel adventure in the Amazon rainforest to visit the splendidly restored dazzling little jewel, and also shared news about the upcoming gala reopening with Placido Domingo singing Don José in Bizet’s Carmen.

Aside | This entry was posted in News, Non-Fiction. Bookmark the permalink.