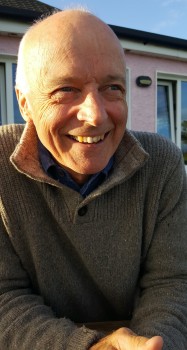 Niall Crowley is an independent consultant and believer in equality and human rights, working in Ireland and places across Europe. He is part of a prose collective supported by Cork County Council, a space that stimulates a passion long forgotten but gaining strength.

He is author of ‘Empty Promises: Bringing the Equality Authority to Heel’, A&A Farmar, 2010. His short stories have been published by The Galway Review, CafeLit, The Writers Club, Pure Slush, and Spillwords Press.

He was shortlisted for the From The Well short story competition of Cork County Council Library and Arts Service 2021.

I was startled, the stifled gasp behind made me turn. I could see her hand gone up to cover her mouth for shock. At the same time, she peered at the ground with an intensity that seemed closer to excitement. A matted splatter was visible on the road, some form of road kill. She stepped back in apparent consternation.

We both stood over it then, contemplating in awe, even reverence. Feathers splayed, surprisingly small, one part shining black with a dab of startling yellow. No other means of identification remained, or was needed. A goldfinch, yet another victim of human intervention, though hard to imagine how one so fleet could be struck.

She was upset, harking back to yesterday’s sighting of the bird. We were sat on the doorstep with morning tea and biscuits, break time. The whistle and twist of its call had caught her attention. She was gripped, jabbing at my ribs to get attention. We had stared, both spellbound, as it perched, almost for show, on the wire above. Red cheeks, fluffed white collar, and those bursts of yellow on the wing. Then, in the actual blink of an eye, it was gone. She had that bird down as an omen of good luck and wellbeing.

I was insensitive, poking charily at the remains to see if I could extract some of those feathers. The kill was fresh, the crushed carcass still held traction over its spoils. There was an unpleasant gelatinous sensation as I pulled at the feathers. A spray of them came away, with fleshy fragments attached. I held my trophy gingerly, heading back to the house in search of some means of cleaning it.

She was unimpressed, uncomfortable at the violation, but generous enough to be entranced by the sanitised feathers. Straight off she created a little shrine on the window ledge inside the porch, feathers laid out carefully across a rising bed of multi-shaded pebbles. Memento mori, she pronounced gloomily, we are mortal, live life to the full knowing you will die. A tribute to beauty that was inevitably transitory, she said, a reminder to treasure the world around us.

I was pragmatic, holding a feather up to each ear to demonstrate their true potential. With some artistry and a pair of silver hooks, she could have a remarkable pair of earrings. She was riled, whether at the disrespect to the dead or at the values on display I could not be sure. In repetitious detail she recounted how, in the past, the Victorians had run the bird near to extinction with their demand to cage beauty for display and turn a profit from nature.

We marched back down the road to bury the remains, at her urging, as if in punishment. No thought given as to how the squashed carcass was to be moved or interred, just an insistent concern to mark its demise and give it due respect. Thankfully, given the role I was surely to be accorded, it was gone without trace, courtesy of some hungry rodent or fox. Reprieved, I was determined to search no further. The imperatives of the food chain, however natural, left her disconcerted.

She was provoked, deeming my obvious relief an inability to empathise. Whether with the misfortune of the goldfinch or with her upset at its demise was not made clear. My distaste in having to deal with the carcass offered no reprieve. I had, after all, been happy enough to rip out its feathers. Maybe a teasing tone crept uninvited into the exchange, a smile that she could have experienced as mockery. Provocation gave way to anger on her part, that I’m certain of. I seethed at that first hint. Flight or fight as nature would have it, though that’s more to do with danger than mere incipient anger.

We stormed our way back up to the house. Stood together by the doorstep, though definitively apart, we were caught up by the compelling panorama. An incoming tide in a rush of white topped waves swept over the sandbank. Kite surfers packed up gaudy equipment below us. Intermittent fishing boats scuttled towards harbour along the far side of the bay. The rowing club beside the quay discharged its boats for evening practice. Life went on, without a thought for the trauma up here.

I was swamped in distress, sullen silence taking hold of me. She seemed caught up too, but more in the drama of the spectacle than any particular concern or contestation. Maybe trauma, swamp, and distress were inappropriate labels, even if they captured my perspective on the fray with ease. I poked and prodded to check her mood with some inanities, to a level of aggravation that drove her to retire indoors.

We were sat back on the doorstep then, still distant but with the enticement of a soothing evening drink. She stretched out her hand, gaze fixed to where the bay extended without boundary into its match in the sky. I reached over and held on tightly, gratefully even, ready to be hauled to safe refuge. I wondered why it was not me to stretch out a hand. Maybe we both wondered. The gloom lifted, though, and heady relief flowed along that reopened channel. Real life re-asserted and we could smile at each other, without incitement.

I was decided, a shrine to contend with her feathered memento mori was needed. The transience of beauty marked by her shrine could all too easily intimate an impermanence of beautiful relationships. My shrine would be a memento dissentio, on the opposite ledge. A snapshot of that finely contoured hand stretched out in succour, with a more gnarled version reaching out to grasp in relief. We are lovers, cherish each other knowing you will have rows that must not be taken too seriously. That would do it, might do it, serve to protect rather than mourn beauty.