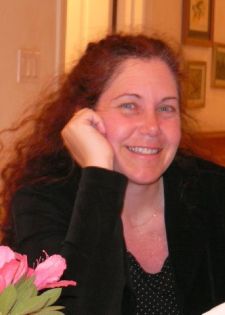 Tobi Alfier is published nationally and internationally. Credits include War, Literature and the Arts, The American Journal of Poetry, KGB Bar Lit Mag, Cholla Needles, The Galway Review, The Ogham Stone, Permafrost, Gargoyle, Arkansas Review, and others. She is co-editor of San Pedro River Review (www.bluehorsepress.com).

We took the bus late morning
you with your new green purse—
leather soft as all clichés,
the color of fields in a sky darkened
with rain, of ancient walls
of villas with years of smoke
from coal-fed fires
and patterns of blowsy roses
barely visible, yet welcoming
just the same.

The stagnant drone of traffic
in the roundabout at city center,
hum of tractors carving
wide swaths across what will be hay
to feed the livestock, undercurrents
of conversations between
lunch guests newly met, seated
at a long table in the outdoor sun—
birds and wine, flushed faces
glowing in the soft blue
of a lazy sky.

We decide to skip the bus,
walk downhill toward
our beloved pensione in Florence
where we reclaim each other
every few years. I prefer paths
discovered by my feet only
but we follow the tamped-down
wildflowers and head toward
the city below. The day unfolds
into the hazy heat and at last—
you shut the door without a sound,
softly lower the blinds—
call the silence to you.

Gone west long enough ago to lose
her accent except when riled up
or drunk, she packs her lunches
for work three days at a time.
That means two days she’s got
nuthin’ to do but go to Happy Hour,
sit pretty at the bar, talk trashy—
more so as her glass empties and the sun
goes down, and look for anyone
to flirt with in the mirror
over the back bar.

Lunches for her were a big pot of oats
measured into jars, mixed with trappings
that were supposed to be healthy.
But the oats were healthy enough—
most days she could barely
get ‘em down—they were cheap,
gave her change for drinks,
and left her with jars to fill for church
giveaways. A giant scoop of butter pecan
ice cream, melted, and stirred in at lunchtime,
and Bob’s your uncle.

She says she’s from some town down south,
where bills piled up like shuttered mills
and blues were played anyplace
from bus benches to honky-tonks.
Jack and ginger was the drug of choice,
and everyone wanted to get away but few
had the balls to actually run.
She reached the sea, exhaled, and found
a new barstool to tell her troubles to
even as back home, stories were already
settling themselves around her name.