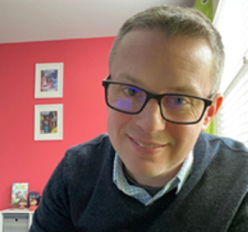 Phillip Knight Scott is a native of Durham, North Carolina, where he lives and writes poetry. His work has appeared in Scarlet Leaf Review, Vita Brevis, Literary Yard, and Olives Skins, among others.

His first collection of poems, Paint the Living, Plant the Dead, is available along with new scribbles on his website, phillipknightscott.com.

I add five to the clock. You’re probably winding wool
instead of clock hands, a view of Big Ben
from your office window, the smell of shepherds pie
blowing into the London air. My pie is apple, or

it would be if I took the time. Galas are
my favorites, though from time to time I will
condescend to red delicious.  The clock meanders,
minutes mirrored around a globe revolving once a day

or so, while I despair at crawling five hours behind. I wonder
what you’re doing with your head start and if I’ll ever
catch up to you, dark hair wound between
five fingers, clock hands frozen at midnight.

The rocks mark the ground
between prospering weeds enriched
by the warmth of a sun surging overhead,
encircling those of us interred
on a planet whose
percussive heartbeat rocks me to sleep.

I sense the presence of wildflowers,
of ants scurrying together in the dirt,
of life — too bountiful to count or name —
thriving in the darkness or
at least out of sight —
I dare not note a difference in perspective.

Photos remain after we pass on
a gentle breeze that thoughtlessly turns
blacks to sepia, discoloring too many memories
otherwise cruelly lost
in darkness
even though the sun shines tomorrow.

She creased my heart to make
an impression, ambient
thoughts blend with memories
woven from life before you left
a mark on me the last time.

So I look to the future, folding
new experiences like
an origami lotus flower —
now germinated — shoots shouting
in the sun not for the last time.

The house on Marford peaks
above the hedge, shaggy tiles
(dulled to grey from years
in the sun) frown
under the weight of domestic
solitude.

Isolation trickled down the chimney
until the walls began to rot
(like fruit in the sun
too long) until the squat couple
can’t bear to peek
through the window.