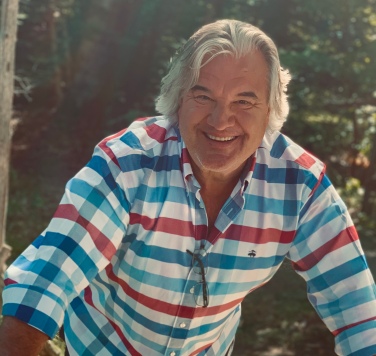 Gil Hoy is a widely published Boston poet and writer who studied poetry and writing at Boston University through its Evergreen program. Hoy previously received a B.A . in Philosophy and Political Science from Boston University, an M.A. in Government from Georgetown University, and a J.D. from the University of Virginia School of Law. His work has recently appeared in Best Poetry Online, Muddy River Poetry Review,  Tipton Poetry Journal, Rusty Truck,  Mobius: The Journal of Social Change, The Penmen Review, Misfit Magazine, Rat’s Ass Review, Chiron Review, The New Verse News  and elsewhere. Hoy was nominated for a Best of the Net award last year.

They all thought he was famous. But the truth was, he was not. Perhaps it was the long, flowing gray mane that came out of his large head, coupled with his boyish good looks and infectious charm.

Perhaps it was the way Gary Wellington could look into a woman’s soul and speak the words she’d always wanted to hear. Beautiful words like “loyalty”, “understanding”, “compassion” and “honesty”. Beautiful words like “forgiveness”,  “adoration”, “passion” and “love”.  Perhaps it was his man’s man’s physique that he’d built up after many hard days and years in local gyms.

Gary Wellington was an American. He was also a world traveler. He generally preferred to travel alone. He particularly enjoyed travelling to Spanish speaking countries. He liked the way the words sounded and the romance of it. He also liked the language’s Latin origin, its long sentences and poetic rhythm.

When Gary Wellington entered a steakhouse near his hotel in Madrid, he heard a man in the front in a black tuxedo say that he must be “muy importante”. Gary Wellington didn’t know why the man had said what he said about him nor did he really know what the man meant. It wasn’t the first time this had happened to him.

While Gary Wellington sat eating the best part of a bull in Madrid, his waiter kept filling and refilling his wine glass with red wine. Gary Wellington had to stop drinking to politely keep his waiter away. He wanted to be able to just quietly sit there and think. But so many waiters and so many waitresses tried to get close to him that it became difficult for Gary Wellington to breathe. He soon had to go back to his hotel.

Gary Wellington had been in a tapas restaurant in Barcelona just the night before. He had had a wonderful evening there with his elegant wife and their second son. His son was a street-smart, wise young man who was a mediocre student. His wife had the most beautiful face he’d ever seen and he loved her very much.

Another patron had shyly approached Gary Wellington to ask if he might be the famous musician playing guitar who he and his lady friend had seen on the stage the night before. Gary Wellington assured him that he was not. He later worried he might have embarrassed the shy man who, upon hearing the bad news, had quickly left the restaurant without saying another word.

Gary Wellington was alone when he went for a swim a week later in his hotel pool on a beach in Mazatlán. His wife and his son had already gone home. Seeing the sun slowly rise from the sea was a very fine thing. But it always made him feel sad knowing he had to die one day and that he’d never again see the sun after that.

Gary Wellington had asked his father, more than four decades before, “Is it hard to die, Dad?” His father had replied, “Sometimes it is, and sometimes it isn’t. It just depends on the luck of the draw.” Gary Wellington had dreamt that night that his life was like his favorite book. It had a beginning and an end and many chapters in between.

Gary Wellington took two chairs by the pool on the beach in Mazatlán. He sat down in one of them. He put his sunglasses, sandals and a copy of Hemingway’s “Death in the Afternoon” on the other.

Another man and his woman were standing nearby. They’d been able to garner only one chair. There were two of them so they needed another.

Gary Wellington politely offered up a chair, the one with his book, sunglasses and sandals. He had to do it more than once because their English wasn’t very good. And despite his love of the language, his Spanish wasn’t a whole lot better. When they finally understood him, they gratefully accepted his offer.

Gary Wellington later learned that the man was a colonel in the Columbian army and that he would be a general in five years if all went according to plan. That afternoon, the colonel said many times that he and Gary Wellington were “hermanos” and that their countries were “muy buenos amigos”.

The colonel’s wife was very beautiful. She smiled as she rubbed her body up against Gary Wellington. The colonel wasn’t jealous. He seemed almost to invite what he no doubt saw as a mostly innocent flirtation.

The two men talked for a while. They understood very little of what the other was saying. The colonel said that learning English was “importante”.  And that learning Spanish was “muy importante”. Gary Wellington wholeheartedly agreed. Not only because he loved the language, but also because 400 million people spoke it and it was the official language in 21 countries.

Soon enough, there were many English and Spanish speaking men and women crowded around Gary Wellington. They all wanted to touch him and to be his friend. Some of the women wanted more.

The most beautiful woman among them was a twenty-something from Columbia with long, straight black hair. Her skimpy bikini markedly showed off the fine form that her maker had given her. She moved her trim, tan body in the most alluring of ways. She didn’t have to work hard to keep her exceptionally good looks.

A man living in Dallas, Texas looked like Roberto Duran. Or a triumphant matador after a bull fight, receiving his richly deserved applause while surrounded by Ronda’s architectural and cultural romance in a bull ring in Spain.

He was small, but solidly built, with a rugged manly beard and a fine black mustache. He looked like a man who packed a powerful punch. He had a husky voice and spoke like a man who could give back as well as he got.

The Dallas, Texas man asked the colonel why there were so many riots in so many of Columbia’s cities. The colonel said there were many poor families living there who wanted what they believed was their fair share of his country’s food. Gary Wellington said that all of the riots in all of the world seemed to be about those kinds of things.

The Dallas, Texas man told Gary Wellington that he knew something important about the beautiful, twenty-something Columbian girl with the long, straight, black hair. That she was the complete “Latin package”. And that this was true both in her fiery temperament and in the ways she made love. His eyes longingly roamed over her with sincere admiration.

Some men preferred reading books about women like her rather than experience the real thing. Gary Wellington wasn’t one of them. That was not his way. Never had been, never would be.

For Gary Wellington, the bullfight was always better than the book about it. And all of the books in all of the world based on just one trip to the ring were the worst of the worst. Men writing so badly they could never have a clear thought nor ever write a true statement.

Just then, it started to rain. The clouds had grown dark when no one was looking. Soon, it was raining hard. The sun had disappeared behind the clouds and Gary Wellington knew it was time for him to leave.

He had had a lot of bourbon and even more sun. He hoped his new friends wouldn’t think he was leaving them because he was an arrogant man or a conceited man. Or because he was a rich man.

The truth was very different. It was really his nerves that made him want to leave them. His fear that he could never live up to what they thought he must be.

All of the men and all of the women around the pool that day thought that Gary Wellington must be a very famous man. They also believed that he must be a very rich man. But the truth was, he was neither. He was not famous and he was not very rich. At least, not in the ways that they thought.

The twenty-something beautiful girl from Columbia, with the long, straight, black hair, said to Gary Wellington, “I know you are famous. And I know you are rich. Thank you for taking the time to be with us today.”

Gary Wellington knew exactly who and what he was. He had reasoned it out. He thanked the young girl for her kindness, kissed her on her mouth, and began slowly walking back to his hotel room under black clouds. It had stopped raining. He was alone, once again.

This entry was posted in Fiction, News, Non-Fiction. Bookmark the permalink.
Loading Comments...