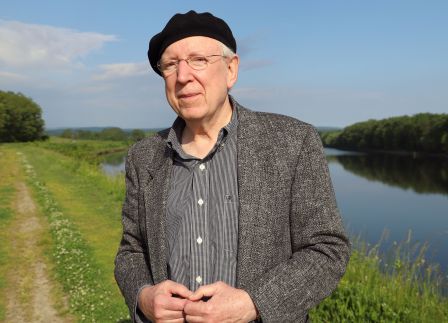 Wally Swist’s books include Huang Po and the Dimensions of Love (Southern Illinois University Press, 2012), selected by Yusef Komunyakaa as co-winner in the 2011 Crab Orchard Series Open Poetry Contest, and A Bird Who Seems to Know Me: Poems Regarding Birds & Nature (Ex Ophidia Press, 2019), the winner of the 2018 Ex Ophidia Press Poetry Prize. His recent poems have or will appear in Commonweal, Rattle, and Transference: A Literary Journal Featuring the Art & Process of Translation.
Recent books include The Bees of the Invisible (2019) and Evanescence: Selected Poems (2020), both with Shanti Arts.

The Republican Provision Barring Enforcement of The Migratory Bird Treaty

James Merrill, whom I met and had the great honor
of speaking with on a couple of occasions, once used

the word myopic in one of the poems in Mirabell:
Books of Number.  The Republicans are, indeed, myopic;

however, dare I say, they are moreover, blind. What is
tragic here, as the modern mystic Caroline Myss has

indicated, is that we don’t actually have much time left
to remedy the ecological damage already done.  If we

continue to eradicate species, then we are literally
handcuffing our very existence on the planet. Speaking

of things of a literal nature, I was just conversing with
a friend about strict interpretation of not only Biblical

Orwellian robot culture where human beings are groomed
as prototypes. Another couple of generations of this

draconian authoritarianism, without the beneficence
of metaphorical interpretation and vision, and a new

humanoid world will be copacetic with the deserts nature
will have become, with the once plentiful species, vanished

through the reckless pronouncements of the Republican
oligarchs. Bastards, yes: the conservatives are not only

or species preservation is concerned.  The former always rules
their decisions.  The Robber Barons had nothing on today’s

plutocrats.  Even an armed revolution would be squelched
by those in power, especially since they have made it their

business to keep the masses appeased; the poor downtrodden;
and the writers and artists powerless, by keeping them separate,

with their influence diluted and negligible; not to mention
empowering the wealthy only to become wealthier, with

financial means. I am not able to make a donation; however
much my life-as-nature-poet is my devotion. However,

thank you for sending this sad news about the Republicans
wanting to dismantle The Migratory Bird Treaty.  It is just

like them: feckless thugs with soulless and inert intentions.
Interesting, how I woke up this morning thinking of a haiku

by John Wills: “boulders/ just beneath the boat/ its dawn.”
I felt graced to have been gifted with remembering it, and

even recited it aloud.  What a meditation this haiku is.  May
we keep those images within us to keep ourselves strong.

Nothing is ever simple,
especially any practice, but, simply
repeating the name of the divine

sustains and nourishes,
the prayer acting as the message
and Christ being the answer,

wherever and whenever you find
yourself in your life, over many
years, or in any specific moment.

Let’s say you’ve implemented this
practice for half a century, or more ,
and still remember taking those

first footsteps while silently repeating
the inner prayer of your choosing,
recalling the ardor and apparent

sacrifice that constitutes practice.
Whereas, now, you discover
yourself entering new woods—

at your age, thinking you were
aware of most of the paths,
both taken and not taken—

but entering further into such a dense
forest suffused with the knowledge that
you are reborn again as well as any other.

hovering above us in a blaze of light
is often when we have invoked them
by speaking aloud their names,
and when we speak with such benevolence

we relay what we mean most when
we speak from the heart and its opening.
But how they appear is always a mystery
best left to the opening of our hearts,

since thinking and logic exclude them,
since their otherworldliness exceeds us.
And it is in their mystery
when we are aware of their appearance

by their brushing against us,
electrifying us by their very touch,
the current of which rushes through
our bodies, charging one

chakra after another,
that it is only then that we might be
beneficently blessed enough
to peripherally see the intricate

holograms of light rotating, as does
an orb in a divine radiance,
and if we should focus too consciously
on their startling colors or pulsation,

they disappear, and in our astonishment,
in as much as when they appear,
they vanish, only to instill within us their
magnitude by gliding into a seam of the air.

a sonnet for James Doukas

We can revise anything in our lives in various and sundry ways.
We can also construct a kind of arc which holds up our entire lives
not unlike the fan vaults of English cathedrals, which support
the nave, the transept, and the dome of the church itself.

The arc provides a prototype for how we might reshape ourselves.
We can revise anything in our lives. We can comprehend
our lives in a symphonic way, and not in a linear timeline.
We are conductors conducting a simple remembrance

of our of lives that is not dissimilar from Plainsong, or the chants,
which are sung in a single, musically unaccompanied line.
We are conductors conducting a minor symphony in a major key—
in an attempt to instill our lives with a tone of clarity. If we listen,

we might even hear the chants of the congregation raise up
their voices, as a whole, fill the air to the rafters, since we all are one.

That Grace to Linger

The quiet permeated the breadth
of the very lightness of the morning air,

filling unimaginable space
with a dulcet tone that could be attributed

only to that of the clarity
of a summer morning, particularly

ever so imperceptively, looking right at
you, sitting on the porch, motionless, in

your deck chair, seeming ever so slight
in your nightgown, a breeze riffling

your platinum hair the way a brook’s rush
undulates in the sunlight. Entering into

the day, I stood beside you on the porch,
and sat beside you in the depth

of that stillness, you and the vixen still
gazing at each other, thoroughly at one

with one another, experiencing
the delight in the other, obviously

finding such winsome company
more than a reason enough to bask

in the apparent leisure that the morning
provided, and in that grace to linger

in the generosity of glancing
at each other, and in total harmony

to become filled with inestimable peace,
before which your turning to me

in that silence, and in that moment when
we turned our heads back to the vixen

she was gone, so that in that instant
what we had gleaned was something more

to what is both wild and sacred—
further augmenting our lives forever.

in memory of Steve Clark

Those three days we hiked Big Sur,
over forty years ago, remain with me this spring—
the initial warmth touching us,
filling us with a more pervasive light,
not dissimilar as our keeping the Pacific over one
of our shoulders as we hiked up
the trail into the wilderness, following
switchbacks into the very heart of the deep pine woods.

You not only knew the common names
of the wildflowers but also knew their scientific names,
such as Eschscholzia californica, for California poppy,
and Montia perfoliata, for miner’s lettuce—
pointing out patches of Clematis ligusticifolia, or
old man’s beard, also known as virgin’s bower,
growing around a bend of the trail or across a meadow,
never a pendant or a know-it-all, always a wise teacher.

Around the campfire one night,
after an evening of heartened talk around the fire,
recounting the lyrical anthropological ethnography
of Jaime de Angulo’s Indian Tales and his stories about
the grass people, I was too enthralled to go to sleep,
staying awake while you slipped into one of the pup
tents we set up, and looked deeply into the darkness,
only to unmistakably observe the eyes of a cougar

looking back at me, burning like two of the remaining
coals in the fire pit. Now whenever I think of you, I recall
the goodness you spread wherever you walked or ambled,
the path your work eventually took you, gracing the pages
of The Homer News or classrooms you taught in when
you later lived in Seattle. You have always reminded me
of the silence of that cougar I saw blinking its eyes just
beyond the firelight, of its silent strength and raw power.

an epistolary exchange with Art Beck

I just want to relay the richness I am grateful
for in our exchange regarding Rilke.  That insight that
Rilke intended to portray that both Jesus

and Magdalen were in love with the illusion of Christ’s
divinity is just stunning; and
that in the poem “The Garden of Olives,” on the eve of

his death, Jesus becomes aware that the Lord
he imagines in his conversation through his prayer,
most likely doesn’t exist, is breathtaking.  Additionally,

the point that you revised the title of “Der Auferstandene”
from “The Resurrected” to “The Risen” to provide
the nuance, and the intended ambiguity, whether it is

Mary Magdalen who has risen rather than Christ,
who may only be resurrected through the transformation
0f his disciples, and not physically, is thoroughly

mesmerizing and offers continued and active
amazement. And, as you point out, nowhere in Rilke’s
later work, including New Poems, does he offer

love as a concept, and that these poems are specific
to things, after his work with and his influence by Rodin—
as you mention, his poems regarding

Orpheus, Eurydice, and Hermes aren’t about love at all;
although, of course, Rilke does portray Orpheus’
relationship with Eurydice as being his failure in love.