P.W. Bridgman – THE GHOST IN THE MACHINE: IRISH POETRY RE-IMAGINED BY THE iPHONE 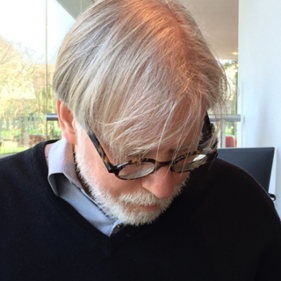 P.W. Bridgman writes from Vancouver. His selection of poems, entitled A Lamb, was published by Ekstasis Editions in 2018. It was preceded in 2013 by a selection of short fiction entitled Standing at an Angle to My Age (Libros Libertad). Bridgman’s writing has appeared in The Moth Magazine, The High Window, The Glasgow Review of Books, The Honest Ulsterman, The Bangor Literary Journal, The Galway Review, Ars Medica, Poetry Salzburg Review and other periodicals and anthologies.

THE GHOST IN THE MACHINE:

IRISH POETRY RE-IMAGINED BY THE iPHONE

It all began when, having recently come across an arresting stanza in John Montague’s poem ‘Silences,’ I decided to text it to myself on my mobile (so as to have it handy for future study). The stanza reads:

There is a music beyond all this,

beyond all forms of grievance,

where anger lays its muzzle down

into the lap of silence

Users of text-messaging technology will be familiar with the breathlessly eager and earnest effort that technology’s inbuilt algorithms will expend in order to be helpful; they anticipate what one is aiming to say, pop up their best guesses, and then give you the opportunity to accept them. Or not. To the extent the guesses are correct, you are spared some annoying thumb-typing. To the extent the guesses are close enough, and you accept them, you cede some control over the compositional process to the ghost in the machine. The word ‘insidious’ springs to mind.

When I got to the second line in the Montague stanza—that is, ‘…beyond all forms of grievance,’—I decided, out of curiosity and nothing more, to let my mobile have its way with the entire line and see what it came up with. The result? ‘Best app for our generation.’ I was gobsmacked.

The transfiguration process in that instance yielded what, perhaps, is not a particularly surprising reformulation. As most of us know, artificial intelligence, though plainly ‘artificial,’ also often betrays a sinister, commercial ‘intelligence’ working in the background like the grasping hand of a shadowy, mercantile God.

I wondered: what would some of the Irish poems I know and love look and sound like if they were to unspool the way the iPhone text messaging algorithms expected them to? As if they had been composed by the poets as text messages and those poets had taken their lead from the ghost and accepted its guesses. Intrigued, I then embarked on an experiment. I accepted what was proposed by the ghost after typing the first one or two letters of each word in seven favourite Irish poems into my text messaging app. The transfigurations that follow represent, collectively, the outcome of that experiment.

The results are, by turns, both distressing and darkly amusing, bizarre and occasionally surprising in their lyricism. But more than anything they will reinforce, for most I think, a healthy wariness about the extreme limitations of artificial intelligence. AI may well be able to cause aircraft to take off and land safely (well, sometimes), but… Crafting fine poetry? I don’t believe that anyone need anticipate the infiltration (figuratively) of the university creative writing department, or the garret, by an army of job-killing robotic arms. No yet, anyway.

The words in the transfigured poems below are all the ghost’s, but liberties have been taken with punctuation, capitalisation and the use of italics. The poem ‘So’ is the iPhone transfiguration of ‘Silences’ by John Montague, from Speech Lessons (Oldcastle: Gallery Press, 2011). Similarly, ‘My Internet’ is based upon ‘Moving In’ by Frank Ormsby, from Goat’s Milk (Hexam, Northumberland: Bloodaxe, 2015); ‘Great’ is based upon ‘Glaciers’ by Sinéad Morrissey, in J. Holdridge (ed.), Wake Forest Series of Irish Poetry, Vol. 1 (Winston-Salem, NC: Wake Forest University Press, 2005); ‘No Worries’ is based upon ‘Not Weeding’ by Paula Meehan, from Painting Rain (Manchester: Carcanet, 2009); ‘The Best Song’ is based upon ‘To be Said’ by Vona Groarke, from Flight and Other Poems (Winston-Salem, NC: Wake Forest University Press, 2004); ‘The Photos’ is based upon ‘To Posterity’ by Louis MacNeice, from E.R. Dodds (ed.), The Collected Poems of Louis MacNeice (London: Faber and Faber, 1966); and ‘What Breakfast Lesson?’ is based upon ‘Why Brownlee Left’ by Paul Muldoon, in Why Brownlee Left (London: Faber and Faber, 1980).

All of the subject poems in their original, un-transfigured state can be accessed easily online to the extent that readers may wish to track them in parallel with the ghost’s versions.

Please! I’m at work! And see… because… until

I’m in a position (but unable again).

A small town. But the service!

The issue, and my back, and then…

Best app for our generation.

What are large items? More dollars.

Order some bacon. So?

For one? But the only?

And she fell down.

And she may find the time.

The first and only last information. And now he

is not playing. Let everyone out.

We are having an open discussion about my,

our, early internet: To be called

‘the airport for the last.’

And internet: not really, even. The issue? That… the…

I’m coming to your class… if

Our best wishes for all the weather coming.

The photos, May! Or look! Have

The issue now. (Should I mention before

the issue?) Now: that can be still

No. But she probably—

Thanks. We only took back from

the early offer to work.

Love: when the sun was in (and

the best show). And no better use be saved.

Love the weather, too. (Our time.) Please open your next.

I’m doing call? Love the service. Call you from…?

And then, search. Where? Stuff that becomes you? Day up!

We have our time, love. You say no?

And then, we’re your very important mother. More?

We both have all sorts up like that. But I got

and, really, even speak here. But… really?

But… Our last day may work… with… if you

will follow into flight and from the same class as the…

the house for us. For work tomorrow, we find information. We…

And will you get back? Great, you! Soon? Be…

Order!! Will you be back at work by…?

We both love and we have we.

I am myself even now.

For I am more; she has been coming.

I will have to ask our boss

one… of… Photos from both

Our annual membership may be… at… early.

they had found an apartment. Was

the last real use… has… posted on both?

So, the weather for tomorrow:

For all good, I think. For…