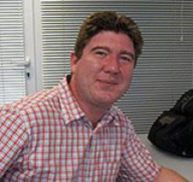 Benjamin Keatinge is a Visiting Research Fellow at the School of English, Trinity College Dublin. He has edited Making Integral: Critical Essays on Richard Murphy, forthcoming from Cork University Press. From 2007 to 2016 he worked as Associate Professor of English at South East European University, Macedonia​. His poetry has appeared in Icarus, College Green and Kore Broadsheets at TCD and on the webpages of Eborakon (University of York). His poem ‘Spring, Ballintemple’ won 3rd prize at the Red Line Book Festival Poetry Competition in 2017 and he has four poems forthcoming in Agenda vol.52, no.1. He lives in Dublin.

Nuriman counted money. He paid us,
with deductions, and himself received
enough, not much.

I’d see him sometimes at the café
to chat to, vestigially, as if
old friends. But then

I noticed that he hadn’t come to work
and soon, I heard he’d died. His funeral
was at the mosque.

Some nights after, my email sidebar glowed
and I beheld his name. It was the green light
of Nuriman.

We are still moving through centuries of loss
across the open prison of this world,
serving our time, we make our cross
in the old way, and with an old
contumacy, rejecting all reform.
We are the vanguard of the older rites,
the priestless ones, born of Avvakum
whose followers in fire and folly we remain.
Grandchildren of the schism, stranniki,
we dwell in villages on corners of the map,
in deltas at Dobruja, Vetka, Kodiak,
to haul as fishermen ancestral nets.
Rowing with the dead souls at our side,
we people this receding, brackish tide.

then graze on
in gaps
where forest
canopy

wrings each leaf
with mildness
and wrests
with peace.