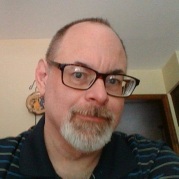 Michael A. Griffith writings have appeared in print and online publications and have been translated into several languages. His first chapbook of poems will be published by The Blue Nib later this year. He lives and teach near Princeton, NJ.

The air crumbles
as he closes the office door.

Turning, he pins you
like a butterfly to velvet.

His voice the only soft thing about him;
his cologne a sharp sting of spice.

If he were your husband, it would be no better;
you are the target, the trophy, a conquest too easy.

Helpless, your voice to protest lost in his power,
his very destruction of the air.

Slow spider approach; he draws near.
Strokes, strokes strands of your hair, then holds you there.

The kiss, lingering as venom, just as deathly.
A whisper, then a murmur; a promise, then the thrust.

You are his today, and you will be again, again, again
until you can fully breathe again.

The Dreams of Beasts

The lion wakes on the warm night savanna.
He raises his stony head and yawns.

He blinks then looks over to the cub he did not murder
and he blinks again, wondering with the mind of a man
if he did not make a mistake.

The cub rolls over to face his father with eyes wide open,
clear as the moon.