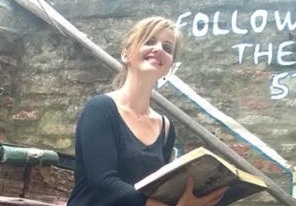 Naida Mujkić is  Bosnian poet. She won first prize at literary festival Slovo Gorčina – the most important award to young poet in the collection of unpublished poems in her country (2006). She was a guest artist at Q21 Museumsquartier Wien (Austria, 2016.) and Goten Publishing (Macedonia, 2017.). Books of poetry: Oscilacije, Zoro, Sarajevo-Zagreb, 2008.Ljubavni šarti mogula, Buybook, Sarajevo-Zagreb, 2015.Šafran, CKO, Tešanj, 2016. Bašta ne cvjeta, CKO, Tešanj, 2017.Book of lyrical prose: Kad sam padala u travu, CKO, Tešanj, 2017. So far, her poems have appeared in many places in the world, as well as in some of the influentual magazines (such as: Lichtungen, Poezija, Izraz, Razlika/ Differance, Behar, BKG…). Her poems are elected in the Anthologies of contemporary bosnian poetry, as well as in the anthologie of Balkan’s youngest generation of poets. She participated in several international poetry festivals.

Tooth falls out of bag of dirt. Woman sits on a log and sees it, but at that moment she thinks how she could have an ice cream. It happened before that teeth fall out of dirt. The other woman, the one that lays in grass, does not see the tooth and she does not think about the ice cream. She remembers those days when she was sitting on the log and when she replanted seeds: cauliflower, cabbage, peppers… Did someone replant broccoli then? She was sure that no one ate them at that point. With the tip of her fingers woman on a log takes the tooth, rolls it around and puts it into other woman’s hand. She squeezes her hand and turns to the other side.

Under black dog tags they came from Ogrozdon, everyone of them
Was the eyewitness of the one next to it, in tangled bones
Of last years falls. Niggardly, tinned in its own
Dusky question. – Well, where are you?, it asked me
While rolling easier then the moon.
Inside of you – I answered. But black nuts didnt hear me.
Then I felt checkered napkin with skulls on it, over it
My mother lived a life as if it was her own.
No one noticed our secret moral.
Our steps into emptiness.
Power not to say: We are the criminals that soak the witnesses
Into ourselves, and for that we are ineffably grateful.
Our heart closed in masks died thousand times since then
In front of outer walls in which we felt breath of old age.
Even before we learned that we shouldnt go far
To forget chords of the apocalypse that cover our garden.
We closed the entrance door to our house. We didn’t know if we should go out or not.
Downpour wasnt starting when I decided to run away from her.

Mirza Okić is Bosnian writer, translator, cuturologist, journalist and director. He was born and lives in Sarajevo. He published two books of poetry: Kuoleman Rakastaja and Humans – Tales of Love and Protest. He was also published in other publications. He wrote several theatre plays too.He studied journalism, philosophy and culture studies.