A successful launch of The Galway Review 6

Tom Kenny, of Kenny’s Bookstore launched the 6th printed edition of The Galway Review in the Hardiman library in National University of Ireland, Galway, on Thursday last, 26 April 2018. Speaking in both Irish and English to the assembled guests he praised the high quality of its contents and indeed the quality of the book itself. He encouraged the work of The Galway Review team and invited them to bring more Irish language content to future editions.

Mayor of Galway, Pearce Flannery in his address delighted in the numbers that were now contributing to The Galway Review and to its increasing annual monthly readership. He commented that Ireland had always been a nation of storytelling and that had not changed, but the method of delivery such as blogs and websites had changed the medium. Máire Holmes, editor-in-chief of The Galway Review was bean an tí and readers on the night included renowned poets and writers Gerard Dawe, Moya Roddy, Ann Jocelyn Henning and her husband Robbie, Daniel Sammon, Sass O’ Flynn, Matt Mooney, Anne Mc Cabe, and Jack Mc Cann.

After the formalities, the gathering had the opportunity of an informal literary chat accompanied by a glass of wine. 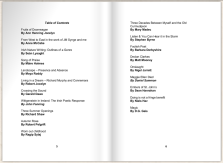