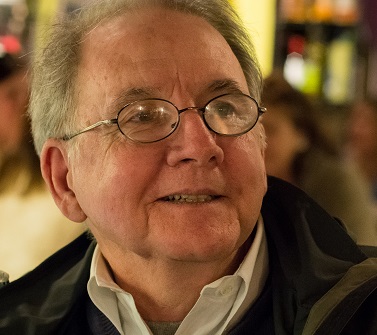 Joseph Chamberlin lives in Baltimore, Maryland, in US, where he works as a mediator. He develops parenting plans that help ensure children keep both parents in their lives. In business settings, Mr. Chamberlin works internationally with profit and non-profit businesses to develop constructive work relationships that ensure productivity and profit. He is the author of “Our Father, Frank: the story of a priest the woman he loved and the sons they left behind,” “A Doctor Dies and other stories,” “Life in the Breach and other poems.” “The Washington Post” and a Baltimore magazine, “Urbanite” has published his essays. Currently he is finishing a memoir, “Joseph, Illegitimate Catholic, Memoir of a Scandalous Bastard,” which tells the tale of his search for his birth mother which became a quest for his birth father. He was a Roman Catholic priest who his birth mother, unable to keep from his first love, the priesthood, decided to leave and give his brother and him up for adoption.

I lift words lightly
From the page
Ideas, images
Linger unreachable
Beyond my grasp
Enjoyment
Enrichment
to seek
another day.

Hands guiding clippers
To give us crew cuts as we sat atop
a bench he crafted from scraps of wood.
Hands since our visit to West Point
put ice cubes in his milk.
Hands holding his face as
he sat down on the steps
too afraid to watch
Marines walk to the house
across Mary Street to tell her,
her Bobby would be coming home in
a week in a flag covered casket.
Hands steering the boat to where he would untangle fish lines
on another of our fishless fishing trips.
Hands directing traffic on the road he worked as a security guard
where he taught our hands to fold the flag at dusk.
Hands holding us still while he wielded a stick to our backsides
for being disrespectful to our mother, his wife.
Now his hands, at his waist, his fingers laced together by rosary beads he
fingered daily as he mouthed words to prayers
we now prayed for him.