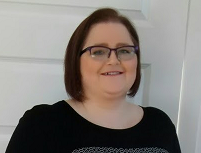 Gaynor Kane, has just reached the end of her studies gaining a BA (Hons) Degree in Humanities with Literature. As well as being a believer in lifelong learning, she is a wife, mother, office manager and writer. Gaynor Kane was born in Belfast and after spending many years in the picturesque villages of Kircubbin and Portavogie, has returned to city living. She was recently published in the Studies in Arts and Humanities (SAH) Journal.

Bon Secours – good help to
those in need. Where disgraceful
daughters are sent to pay.

Homely comforts, as
absent as their ethos;
Sisters ensure every
birth is painful. Homeless,
rebel ghosts march along
corridors, frightened by
the screams of the living.

Seven souls lost in limbo in five months of this year.

On the tilled earth, where nothing
ever grows, the early sun
evaporates the dew. Inside,
steam rises from floors; soon-
to-be mothers, on their knees,
scrub stone. Despite this, disease
clings to every surface like jam
on bread. We have cut the apron
strings to become a free state
and this has led to a depression,
sickness spreads like butter.

A New Year seed splits in two,
X and Y. There is not enough
light for the parent to bloom,
too many germs for full-term
germination. The undeveloped
saplings shoot out, cannot breathe,
their fight for life lasts less than a day;
then like premature Autumn leaves
they become dry and jaundiced,
curling entwined to meet the other
waste souls in a septic tank.

You were two of forty-eight
little lives ended too soon.

There was no poetic snow
on the ground. I ran barefoot
through puddles to get back to you
from a longer mass, celebrating
the holy birth. Christ! I thought,
we should be looking after
the living. When I returned
you were still, stone cold,
with marbled veins.
Both our hearts were broken.

One of twenty-four bodies buried, unmarked
except for the heartbreak of those left behind.

As the light dims, the crescent moon
draws me to the window. A
silhouetted figure appears
to float over misty earth. An
occurrence as regular as
Sunday Mass, t’is becoming
a habit. She holds a little
cocoon, lifts the cesspit lid
and drops it in. Rubbish discarded,
no tiny white coffin with brass plaque.
I cradle my belly. Please God,
let my baby live.

More than three hundred and fifty
infants interred, without care, this decade.

Butterflies with broken wings are lifeless,
limp through lack of care and nectar. Trapped
behind nursery bars, unable to reach a
playground in the cloudless sky. The smell
of burnt caramel from the sugar factory
wafts through the sash but there is no
sweetness here. The painted lady swoops
around, makes no offerings. Pink mist
swirls around, gently falling to the ground.

my Mummy couldn’t
save me
the Nuns didn’t want to
save me
the Priest made the sign of
the cross
God did not
save me.

I joined the other sleeping babies
in a mass grave. No epitaph, or wooden
cross, marking our place of slumber.

I was the last, the seven hundred and ninety-sixth.