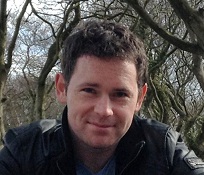 Edward O’Dwyer was born in Limerick, Ireland, in 1984. He has had poems published in journals and anthologies throughout the world, including work in The Forward Book of Poetry 2015.  He took part in Poetry Ireland’s Introduction Series in 2010 and edited the anthology Sextet for Revival Press.  He has been shortlisted for a Hennessy Award and a Desmond O’Grady Prize, among others.  He has been nominated for Forward, Pushcart and Best of the Web prizes.  His debut collection, The Rain on Cruise’s Street, was published by Salmon Poetry in 2014.  The follow-up, Stop Killing Sean Bean!!!, is due in early 2017.

Conversation with a Daisy

Surely this is not what was meant for you.
Didn’t you see more for yourself?
Too beautiful to be common,
growing wild, out here among weeds
and desolate men’s hopelessness.
You were meant for a gardener’s garden.
But then maybe so much of your beauty
comes out of innate wildness,
out of your blatant disregard
for a horticultural authority;
of such a grow-where-I-please attitude.
Looking at you here, now,
poking your head up out of stones
along this railway line, I wonder how
we could have gone so astray,
the both of us,
how we’ve come to find each other
in these most shabby of circumstances.
Is it where we’ve always belonged
or could it have been different once?
Might you have been the envy
of roses, tulips and lilies once-upon-a-time?
Woven into the golden hair
of a desirable woman?
Brief life it would have been
but perfection deserves brevity,
no drawn-out stand-still.
Don’t you know it would have been
a bright and sunny day – the day
she’d have picked you.  Maybe during
a walk by the riverside.
You can forget about it now.
She is never going to be out
walking in these parts, not her.
And we’re so much alike, you and I,
that much occurs to me in this moment.
I have my own regrets, of course.
She might have been mine once, you know.
That desirable woman, whoever she is –
or another like her.
She, holding my hand.
A bright and sunny day.
A walk by the riverside.
Daisy woven into her golden hair.

I’m waiting for you. The time when your text might have arrived
letting me know you’ve been waylaid has been and gone.

That’s not to say, though, that I am getting impatient,
or that these minutes are chipping away at my zeal to see you

arrive in the doorway. And it’s not to say this is lost time,
though my coffee cup is emptied, my short story by Kevin Barry

concluded, the faces at the other tables changed.
I imagine you brushing your hair, then ironing your work shirt.

I imagine you applying lip balm, stopping to pet the dog next door.
I tell the enquiring waiter I’m okay for the moment, thank you;

that I’m waiting for you, and we’ll order mochas when you’re here.
I imagine you’ll be all apologies, perhaps short of breath.

There’s no need at all to hurry, just give me an eager kiss
first thing. Whatever time it is then, I’ll feel it was worth it.

It was worth it the last time. You were dead late that time, too.
I couldn’t stop smiling as cocoa powder collected in your lip balm.

At the Cliffs of Moher

The clouds drift aside
like a bra, one coming slowly undone,
and find an out-of-the-way place for themselves,
a bedroom floor in the sky.

I hold back on mentioning this comparison to her.
It could take from the moment.
There’s always time for that later.
If there’s a poem, maybe I’ll give her a copy.

So I saying nothing, savour
this time anointed by silence
but for the Atlantic waves, the squalling gulls
making their dotted intrusions on the image.