Steve Carr – The Lonely Life of a Telemarketer 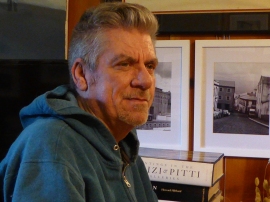 Steve Carr, who lives in Richmond, Virginia, has had over 370 short stories published internationally in print and online magazines, literary journals, reviews and anthologies since June, 2016. He has had six collections of his short stories, Sand, Rain, Heat, The Tales of Talker Knock and 50 Short Stories: The Very Best of Steve Carr, and LGBTQ: 33 Stories, published. His paranormal/horror novel Redbird was released in November, 2019. He has been nominated for a Pushcart Prize twice.

The Lonely Life of a Telemarketer

Everything in the room shook. Afterward, the middle of the night silence seemed more profound. Daniel lay in bed gripping the sides of the mattress waiting for a real earthquake. Dust loosened from the ceiling by the tremor hovered above his bed like a storm cloud. Biting into his lower lip, he strained to listen for noise in the hallway, but heard nothing. He looked at his clock on the bedside stand. It was 3:45.

He got out of bed and walked to the window and pushed aside the curtains. In the next building over, one story down, light was shining dimly through a window. It was close enough to see a couple inside a room on their bed, and in the throes of sex, but not close enough to discern the details. He sighed heavily and then returned to his bed and closed his eyes and waited for sleep that never came.

Three hours later he got out of bed and put on a terrycloth bath robe, grabbed his toiletries bag from the dresser top, and a towel that was hanging on a hook on the door, and went out into the hallway. The only picture hanging on the hallway wall was slightly askew. He straightened it, and then at the end of the hall stopped outside the bathroom and put his ear against the door. Hearing the shower running, he leaned against the wall and waited.

Am elderly man came out of the bathroom with a towel tied around his waist. “I’m getting out of this flea bitten hotel today before it comes crashing down on our heads,” he said, and then rushed down the hallway, his flip flops making smacking noises on the floor.

Stepping out onto the brick paved alleyway, Daniel adjusted his backpack and walked between the hotel and the dry cleaners next door. The alley smelled of freshly laundered clothes and stale urine. He stepped out onto the sidewalk bustling with pedestrians and hurriedly went down the street, finally joining a throng at the bus stop.

“Did you feel the quake last night?” he asked a middle aged woman with shocking red hair.

“I never pay attention to them,” she said, twisting and puckering her lips like she was about to spit something out.

“How can you not pay attention to an earthquake?” he said.

“There are bigger things to worry about,” she said.

The bus was packed. Daniel went half way down the aisle between the rows of seats and grabbed onto the overhead bar. The bus lurched forward causing all those standing to knock into each other like bowling pins, and then began down Broadway.

Unable to see anything out the side windows other than the tops of cars, Daniel scanned the bus for a familiar face. He saw a few, but no one he knew or had ever talked to. Unsuccessfully, he tried to ignore the noxious mixture of body odor, perfume and aftershave that he was stewing in. Once the bus reached his stop near the Embarcadero, Daniel got off the bus, following behind a dozen others.

Daniel rushed to the bank building where he worked and made it to his seat a minute before his shift was to begin.

Patrick sat down in the seat next to his and gave him a huge smile. He started his computer and slipped his headset down over his ears. “Did you feel the earthquake last night?” he said to Daniel. “It scared me to death.”

Sitting on a concrete bench in a small park tucked away behind the bank and surrounded by skyscrapers, Daniel placed the ham and cheese sandwich he got from a machine and a diet coke beside him. He placed his backpack on his lap, unzipped it, and took out the book Bartending for Dummies, and opened it. While reading about daiquiris he pulled the tab on the coke can and unwrapped the sandwich. Just as he took a bite of the sandwich, Patrick came up to him.

Daniel scooted aside. “Of course not. Please do,” he answered cheerfully.

Patrick sat down and placed his small brown paper bag in his lap and a bottle of orange juice on the bench by his side. He opened the bag and pulled out a baggie with a sandwich inside. “What are you reading?” he asked.

Daniel held up the book and showed him the title. “I’m taking bartending classes.”

“Why do you want to be a bartender?”

“It would be a great way to meet people,” he answered, staring at the way Patrick’s lips and cheek muscles moved as he chewed the sandwich. He had never seen something so naturally sensual in his twenty eight years of life.

“Why are you doing telemarketing?”

“I just returned to San Francisco after being away for two years and needed a job while I look for something more substantial,” he said. “But telemarketing is very weird. I talk to a couple hundred people a day and when I get home I can’t recall even one of their names or where they live. They’re all people I’ll probably never meet.” He paused before saying,

“I know what you mean,” Patrick replied. “It’s why I make extra effort to connect with people outside of work.”

Daniel took a long drink of coke, and then said, “I was wondering, would you be interested in going out to dinner with me this evening? There’s a great Italian restaurant near where I live.”

Patrick took a drink of her orange juice. “Sure,” he said. “That would be nice.”

“I’ll write the address down and give it to you when we get back to our stations,” Daniel said. “Would eight o’clock work for you?”

“Sure, that works for me.” He took another drink, then said, “You said you were away for two years. Where were you?”

In his room, Daniel stood in front of the mirror attached to the top of the dresser. It had a hairline crack that ran diagonally from the top left corner to the right bottom corner. His reflection was bisected by the crack. He went to the window and gazed out at the pastel colors of twilight that blanketed the cityscape. The couple seen through the lower window were lying naked on opposite sides of their bed.

He quickly dressed and left the room.

Coming out of the alleyway he stepped into a flow of pedestrians, most of whom were dressed for a night out. The air was still and warm.

Going into the restaurant he was hit with the aromas of garlic, fresh bread and tomato sauce. Seated at a table for two by a window with a view of Coit Tower, Daniel took a breadstick from a basket in the middle of the table and nibbled on it as night fell. At nine o’clock he realized Patrick wasn’t coming, that he had been stood up.

Just as he started to stand up to go, the floor and everything in the restaurant began to shake, violently.

“It’s the big one,” a man screamed before ducking under a table.

Daniel remained seated at his table, dreading going to work the next morning.