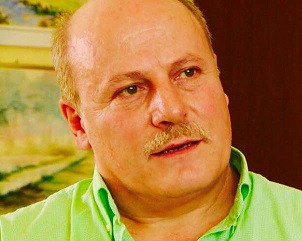 He lives in Sion, Switzerland. His books have been published in French, Romanian, Hungarian, etc.

He also writes poetry. Some prestigious European literary magazines have evaluated his books as important contributions to contemporary literature.

He called me half an hour after midnight.

I prevented myself at the last second from laughing. His voice seemed serious to me and a bit loud. I had the impression that he had eagerly wanted to finish the dinner to give me the news and I noticed that he was looking forward to my reaction.

‘What did you drink? Wine or something else?’ I asked.

‘We started with an aperitif, a bottle of Chardonnay with some toasted bread coated with olives and dry tomatoes, some salmon. Then we had a Syrah with a fillet of veal and vegetable garnish and rounded off the dinner with a Fernet Branca and ice-cream’, he told me.

‘I hope you enjoyed it’ I said. ‘Did she stay with you after the dinner or did you accompany her to the railway station?’.

‘She stayed two hours more. Then I called a taxi’.

I realised that he wanted to close the conversation. I felt that his voice was losing the certainty that it had in the beginning. He is my son. He studied theatre in London, excelling later in two or three performances and in a film. Lately he collaborated with a TV channel in a comedy series that had a pretty good echo. Then he fell into a deep reclusion. It seemed that a girl was the cause of this gloominess. Together with my wife we called the girl the next day and asked her if she would like to meet us. She welcomed our proposal and when we met, she greeted us with a bunch of flowers for my wife. This left us with a very good taste. The fact that we went to meet her empty-handed probably left her a with a bad one. She talked to us all the time about our son, about the magic of his pure soul, his wonderful dreams and his outbreaks of genius.

‘For some time, he has been staying away from me’, she said. ‘In the end I didn’t make much of it. Maybe he will be back. We were so good together! But he is a genius…’.

I didn’t want to make the former girlfriend of my son jealous by telling her that her “genius’ had spent a ‘wonderful night’ with an ant! What we realised was that our son was the cause of the split with that graceful girl who was an actress and a script writer in a local TV station.

When we were leaving, she asked us to do her a favour by contacting him about a series coming up.

Today, he agreed with us to come to the TV station to sign a contract with a national television network for a series in which he would have the main role. He had promised to come. At the last moment he called and said that he couldn’t make it. We had to cancel everything. Our partners were not happy. However, I understood that he might have a strong reason and tried to justify his absence to them.

We remained speechless. What strong reason might have prevented our prince from going to that important meeting to sign a contract with a financial heavyweight while he asks us for money time after time towards the end of every month?

I wanted to ask more of Sara, that was her name, but at the last moment I hesitated.  It seemed to me that I would mess up their relationship and addle my brain as well. I had never been very clear about my relationship with my son. He used to leave things half said as if he was implying something. Our conversations resembled the muted cracks of ice in a half-frozen pond. In most cases I had to guess the rest of his unspoken words. When I tried to reformulate his answer to  show that I had understood him he muttered a ‘yes’ or a ‘no’. His muteness stressed the lack of understanding between us. Our relationship was sailing into thick mists and I was not surprised any more that the ship of our communication, instead of being in friendly harbours, was drifting towards rocky windswept shores.

These were the things I was wondering about after we said goodbye to young Sara. My wife was silent but I felt that she was boiling. It was clear that she was concerned. I had told her about last night’s conversation. She had considered it a joke, a word game, or a metaphor. Probably he had been with another girl and did not want to worry us because he knew that we liked Sara. But we liked Sara for him, not for us! ‘This girl is sweet’, my wife had once said.

We sat in another café plunging in reflections. Then abruptly my wife’s mobile phone tinkled. She opened it. There was a message on WhatsApp from our son. It ran: ‘I’m in a terrible predicament. Mimi gave birth this morning and two of her five kittens were born dead. Mimi is really sad. Can you come to look after her this afternoon? I buried the dead kittens with great sorrow’.

Mimi is a stray cat our son adopted several months ago. After this message we realised how our son had spent that morning and understood the reason for his failure to turn up to sign the contract. As a feline obstetrician he had helped the cat while giving birth and acted as a psychologist for her as well, consoling his Mimi for the loss of her two kittens. He had played his part in the drama of ‘all creatures great and small’.

I remembered that some years ago I had said to my wife that I needed to go to a psychologist to find a proper way to communicate with my son but she had suggested to me that it would be better for me to go to a psychiatrist. That time I had laughed about it. Now, I had to take seriously the issue of psychologist or psychiatrist, for myself or for my son. Whichever one of us needs one of them most.