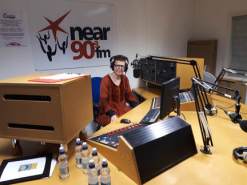 Bernadette Dwan’s first collection, Frankly Baby, was published by Lapwing in 2018. In 2017, she earned second prize in the Johnathan Swift Creative Writing Awards. In 2016, as part of the Scene and Heard Festival – she performed her one-woman show, Unrhymed Dublin, in Smock Alley Theatre. Berni produces and presents The A to Z of Historical Blunders on Near FM radio. Her work has appeared in many spaces including The Irish Times Hennessy New Irish Writing, The Galway Review, Crannóg, A New Ulster, Stepaway Magazine, Crossways Literary Magaznie, The Rose Magazine and Dodging the Rain.

This afternoon I sat on the swing-chair &
read inside my brain; too lazy was I to grab
a book, or pen and paper. “To hell with
industry,” I preached loudly to myself. “Hurray
for idleness,” I rationalised. & so, I sat on that
pendulum of indolence; watched the uncut grass &
dead flower heads without guilt; noticed the empty
bird feeders and the weeds on the patio without
remorse. I

was slipping; becoming edgy; an attack of industriousness
was imminent. I looked at the blue, blue sky with the eye
of a four-year-old; swung madly like a six-year-old; got
drunk on indolence. “To hell with industry,” I shouted,
inebriated with the sheer madness of it. The

garden heaved a sigh of relief, left to grow as gardens grow, for
another day, at any rate. Instead, I read inside my brain; figured
stuff out, evicted industrious thoughts & left room for deep ones;
daft ones. I

felt bold & emboldened. All swung out and high on lethargy, I
went indoors and resumed my grown-up life.