Kevin Bateman has been running live-broadcast Spoken Word events over Periscope every few months since the summer of 2016. Many of them take place in areas of Ireland and elsewhere that have been regarded as sacred since ancient times.

His shows give poets and spoken word artists a platform to showcase their work.

“Artists are overlooked,” he says. “Even the RTE presenters, pundits on television, always the same names! There are other artists that are not given a forum for their poetry.”

He broadcasts the events “to promote artists, to get their names out there. There are a lot of forgotten poets, and they should be spotlighted.”

One of these performances took place near a favourite haunt of WB Yeats at Thoor, Ballylee, Galway on 28th October 2017. You can watch the event as it happened on Periscope and YouTube. Of choosing a location made famous by Yeats, Bateman cites (perhaps) the Nobel laureate’s Celtic twilight subject matter, and his interest in the occult and esoteric.

“There’s a mystique to his character,” Bateman says. Another reason for this choice of site is “Yeats’s stature, what he did to get where he got to.”

Bateman generously kept his own set brief, with a strong theme of morbidity and the loss of love. “Our ancient enemy friends, release me from your trance”, his first poem implores, ending on a powerful, absurdist note, and perhaps playing on the word still:

“Still love, in its hyena madness, we felt righteous.”

The second poem entitled Forever, ever fear death sounds darker in title than it was from its content. A holy road is cited – and one expects echoes of St. Paul on his way to Damascus, or burning bushes. Instead, we get an autumnal scene, and a sense of play about burial beneath leaves, and comparisons between the crumpled leaves and wrinkled skin.

Matt Mooney, a veteran schoolteacher from Listowel, is among the poets Bateman whom champions.

One of his pieces featured “Words showing you a lifeline, calling you away from the brink.” He describes (perhaps) inspiration as “gifts unpaid, unaided words that drop into your head”, “words that spring up in your singing voice.”

A poem called The Intruder broaches the topic of “an early morning intrusion into my sleep and I myself became the intruder.” Hearing a cackle, the poet’s narrator realised there was a pheasant nearby, guarding her brood “So I stole off with my camera for an exciting morning shoot.”

The pheasant continues to cackle, “broadcasting her protestations that I was an intruder prying into her private family affairs.”

Matt Mooney’s poem The Winterman, was a broadside against the dark cold season:

“I do not like you, winterman,” he states, describing “Headlights on at half past five against your onward march” and “A rising string of streetlights…each orange glow my beacon”.

Declan Clark’s is “the wayside pub” where the poet is met with intoxicating sounds of song and dance “refuelling my senses after the long weary miles”. Beautiful imagery is evoked through the set dance in the pub as “neither the young or old spare the wooden floor”.

Daniel Mulcahy was the next poet on the bill. His first piece involved a fight with his brother.

“We were in the Alps at the time,” Daniel explained by way of introduction. “My brother wouldn’t let me put on my seatbelt.” He got out of the car to “hike back uproad to the chateau”, pausing to read and to relieve himself.

“Gasps of cloud / Leaving me cold and spent in the company of menacing sheep.”

The family theme continued with touching tributes to Mulcahy’s grandfather and grandmother. 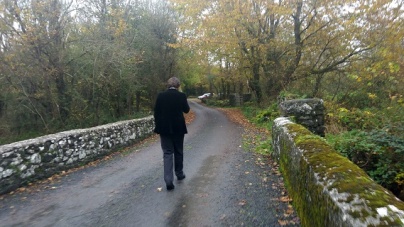 In Election, “another haggard truth” comes out as his mother broke the news of Trump’s election victory on the staircase. A poem for his grandmother involves home décor, “wooden seagulls hang suspended,” memorabilia from a “sombre ancestor” and reading material which includes The Return of the Prodigal Son by Brecht. His grandmother bakes with “Flour caked hands as she kneads the dough,” the kitchen a “room of soup, jam and brown bread.”

Last on the bill was Aisling Keogh who read a short story called Greyscale, where an ex-boyfriend is keen to revisit “a memory of a sunset with” the narrator. Although not overt, the details of the practical, rational, and scientific difficulties of timing the sharing of the sunset on Lough Corrib could be contrasted with the more romantic and passionate gesture – both aspects could be seen as calculated, to a literal degree. The binary elements of the gesture, rational and emotional, could be seen as gender difference too. The story’s subtleties – inter alia in the analysis of the timing of the sunset in this light – could be read as the loss of love, and perhaps the struggles of analysis involved in moving on.

This entry was posted in News, Non-Fiction, Review. Bookmark the permalink.
Loading Comments...