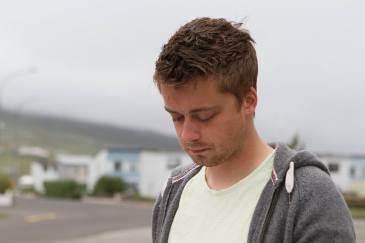 Stephen De Burca is 25 year old writer from Galway City. His poetry has been included in publications based in the UK, the US, and in Ireland, most of which have been composed whilst attending art-residencies in Iceland and across Europe. After completing a BA in English and Philosophy this year at NUIG, Stephen will be enrolling in the University of Florida’s poetry MFA in August 2017.

A seagull
snaps at a stray McDonagh’s chip.
He cries, takes to the sky
and like a boy
floats in the evening current.

The Corrib at night bursts in white-horses
thrashing under the Salmon Weir and Wolfe Tone
and arrives at the Spanish Arch,
calming at the sight of Galway Bay’s promise.

A solitary searchlight
probes to the crescendo
of a low-flying helicopter.

It is bright enough in the back garden
to squint the eyes
beneath a mundane sky
of one blanketing cloud,
insulating a breeze that moves
simply without direction.

A robin appears,
red breast and all,
on the gravel-grey metal table,
popping by as if I wasn’t there,
his movements fluidly abrupt.

To my left, from
a wooden flower bed older than me
overcome with purple bellflowers,
there is a noise
like a clearing of the throat.

A bee,
as plain as you could imagine,
climbs into a five-petalled head
– each petal splaying a curve of what if –
buzzes, retreats,
enters another.

and as spectator
you’re left knowing.

The robin has left, his message delivered.

Where does your life come from
as you limp from oven to table,
carrying palm-searing hot plates?
Half-hearted offers to help you,
you’ve learned, are best dealt
with a no no no.

What gives you happiness in the
business talk of mealtimes?
It’s there! Out the window
aligned perfectly with your chair,
catching your smile like
a glitter of dust.

The goldfinches and the sparrows on the feeders,
those flashes of gold,
a silent cartoon.
You pause

and eat with them,
free from arthritis and bursitis,
in the spring air of
a happy Grandmother.

A Drive to Tully

Take me on that journey in your red Jetta,
the one with the worm of rust by the fuel tank mouth.

Let us zip on the Inagh Valley roads
pimpled and bunched by the up-downs and side-to-sides.
Name all those hunched mountains and pockets of water
so I can hold them close.

Slow down for the sheep,
the Larry-lamb-chops at the side of the road,
and we’ll smile together
as the sun reifies our love like a pathetic fallacy.

Drive us past Glassilaun beach,
where I cut my foot on a stray mussel shell
and cried and cried while you and mum
sacrificed the ice-cream napkins to make a bandage.

And when we reach Tullycross
I’ll know we’re nearly there,
that this will become a memory –
half-forgotten, half-cherished.

I can smell the mussels cooking
on the kitchen stove, gently opening
in coconut milk and speckles of red chili,
a smell that still takes me back there;

to when we got out of the car and you went in the house
and I watched the waves, cold
as they fell at the feet of Mweelrea,
as the tide came in.