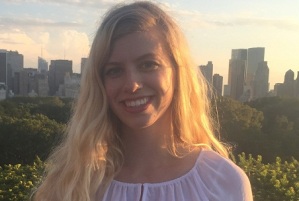 Shannon Kelly, a native of Lincoln, Nebraska, now lives in Galway. Her work has been featured in Off the Coast, The Summit Avenue Review, and The Tenth Muse as well as conferences around the United States. Additionally, she runs a travel blog and composes music, and is the recipient of the 2012 Lied Songwriting Contest. She is currently working toward her MA in writing at NUI Galway.

Élisabeth Vigée Le Brun was a prominent French portrait artist. Throughout her career she painted 660 portraits, including many of Marie Antoinette, of whom she became a close friend.

She chose a rose, the young painter,
to place in the hand of the Dauphine.

It was 1783, in the year of our Lord
and of hunger, the foreshadowed flood

stalking the streets of Paris. At Versailles,
though, the rouged women spoke

silk and ruched satin, thought a rose
trivial, but curtsied to Madame Deficit

all the same. 30 portraits seemed enough,
but the age spoke of excess, no matter.

She could make meaning from brushstrokes,
but never quite got the hang of words;

Vigée le Brun, at peace with her paints,
her subject and her bell chime voice,

and a world begging for brioche
15 miles from the golden gates.

What people don’t see are the un-painted
pieces, the frills that cover minor paint spills,

gauzy indigos swept over the stricken spine
of Louis Joseph, streaks of color that could

There is what you see and what is.

to a number; no roses were left
pour la Plus Triste Reine de Tous,

but only blurry nightmare visions,
once-familiar faces raised on pikes

and fragments of bodies, scraped
out, the human shelled and slaughtered.

There is what you see and what’s inside.

Le Brun gave herself a straw hat and palette
to be remembered by; she would show working

hands and sensible shoes, would cover shoulders
to avoid sneers on reputations. One condemnation

was enough. For years she would ask
how a solitary skin-tone rose spilled

the sweetest blood she had painted yet.
Ah—but canvas registers only skin

and its implicit vices. If only
she had been a poet, she thought,

she might master words—quiet revolutions
of their own. But no poet is accepted

in his native land, and each generation
kills its kings, its gods, undoing

and doing again, each year an upheaval
and afterward, a settling, like snow.

the past, and paint defeats pen defeats
paper in a battle that is never won

until the Last Words, the only legacy
one really has the right to freely leave.

Forgive me, for I did not mean to do it.

Sonnet for a Lost Sister

Born Bridget Boland in Ballyvadlea
and burned alive before the pastor,
she died in just her stockings with no fight.
Torn from those old hills and given to Cleary,
what woman wouldn’t find herself a changeling?
Which of us would take a half-shelled offering
in exchange for the soul and body we knew?
It is the same with you, sister—blessings
at the altar, promises of the future—
Perhaps you were a fairy, disappeared
into the sky, like ashes or like smoke.
It brings me comfort yet to think of you
atop the building looking heavenward,
your heart ablaze with what was yet to come.