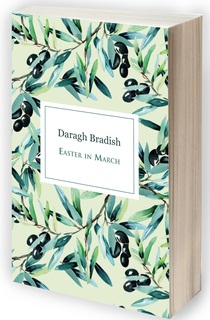 Bradish, a Dublin Poet, locates his poems in that city; on its canals, piers and beaches and in its dwellings. County Clare topography appears and Rome provides a backdrop to a sequence of poems in the final section. This is his first collection.

The book was launched in March at Eastertime, appropriate then the title. You could be forgiven for thinking that this is another volume with commemoration and the 1916 Rising, as it’s backdrop.  Poems after McDonagh, Yeats, Pearse etc as departure points.  You couldn’t be further from the truth and yet in an oblique way this collection is memory hungry and remembering is central to the book in determining how the poet sees himself as a man in a family both past and present, and how he see himself as an artist.

He has concerns in identifying the kind of Ireland he lives in and his relationship to it. Beauty, though not the terrible beauty of Yeats, is observed and contemplated in a series of poems and is regarded as the road to our salvation.

Bradish builds tight structures. The opening, a quote from R M Rilke, give us the orientation, a lucky charm to travel with. ‘One must splice oneself, into some great circuit; but one must also insulate oneself, in order not to mischannel, not to use up, not to lose the current that one carries.’ from Rilke’s Letters on Cezanne.  The mission is called. The metaphor of the circuit struck. It is this metaphor that permeates this collection, where the pilgrim is on a journey during which things recur.

The title poem stands apart from the three movements, and acts as the orchestra tuning up to the given note where in the first two words we learn ‘It recurs ‘ it sounds the Rilke note of circuits. We are brought into the circle of life, the been-here-before place of Easter in March where things are moving.  Resurrection, rising notes are in the air, and we are moving into the collection of things past, things present, and things that will come round again.

The portal is given. A window in a house in Rathgar, a woman appears, daffodils are being offered. Reminiscent of Kinsella’s ‘Mirror in February’ there’s pruning, shearing, cutting back, sacrifice, the prospect of bright new thing’s springtime growth, a song of eternity. ‘Another March come round again to feed the heart’s old inclination/ an endlessness presents that reassures/ though heaving forward, as something like spent love luffs by’

As much as it is all of the above, the poem along with ‘Broad Ditch’ which is Bradish in translation, is a meditation on the poetic process itself.  In the next poem, the poet locates himself in his name. No haloes or ascension here but a canal emptying, revealing the ‘detrius’ and starting as Yeats would have it in the  ‘foul rag and bone shop of the heart.’  We are into the buried bodies of the individual and the collective psyche, where we can ‘take stock of endless throwaways…..’ of what is coming ‘ slowly to the surface  -after lifetimes’ and we will return ‘Beautiful plume headed pilgrims/ come to reclaim our losses/ gathering like small children gather/ such cast-offs they can make belief from’.

The invocation of starting ‘with a collector hand/ to gather up from places you imagined empty/ the put-asides once left on shelves awaiting rescue’  in ‘Prelude’, becomes the drive and pulse of the books three movements. Section One, childhood bliss, peopled with family. Second Two, the click of being in the world where life is not neat or simple. Discordant notes coming into play. Section Three, where the poet finds voice through small lives contemplated and beauty observed. Collection, recollection ‘in memory everything seems to happen to music’ in Bradish’s work, just like in Tennessee Williams ‘Glass Menagerie.’ Children rhyming on the beach in ‘First Memory, Portmarnock Strand’.  Again  a girl aunt moving to Some Kind of Wonderful in ‘Radio Drifters’ with the poet ‘stumbling out of sequence into dance’

In ‘Sounds that are Brightest’ the lyric in all its beauty ‘Since you are gone it is your singing voice I hear…………/today I rose from plucking weeds, and standing back, sore,/heard the sounds of past-loved summers sung.’  We hear the air, scent the melody of ghosts of people who were, in Montague’s words ‘Like dolmans’ around the poet’s childhood.

In ‘Trespassers’, we see Bradish’s visual and aural acuity at its best with ‘The round moon up and gaping/ we cross the widest field I ever walked’. The individual scene and Ireland collide in the lines ‘We have come from rough lands/ on to cultivated ground’.  Images linger and last lines of this poem detonate mildly, as Dannie Abse once put it, into the distance. The voice of man and poet are fully realised in ‘Morning Radio’.

Location shifts to County Clare in ‘From Mullaghmore’, ‘Stranger’, and ‘Pilgrim Siftings’.    ‘we took the trail /of seeded touchstones’  and ‘ We have come full circuit on the strand’

Into the third section and the world lived out in ‘Small Lives’. Loss, separation, and grief are palpable in a fine poem ‘Now Fly Me To The Moon’ the poet saying goodbye to a son at the airport. ‘A set  down area for passengers with flights to catch’ A play scene is recollected, cardboard rocket, a space voyage to the moon, where we have the son loss of nerve, the mission abandoned   ‘one tiny slip from courage’ Again all things recur. ‘What scared you on the moon-face that time, scares me now’ The poet heading home alone  and the line ‘you left me in a space box cut adrift’.

The poet has a good understanding of form. Silence and space are important and give the poems the power to bring subject matter to us obliquely.

Because I am silent

These poems sit quietly on the page. Their quietness gives them greater insistence and a more enduring quality. Through the imagery of circuit, collector, the pilgrim on a journey, Bradish makes himself very present to us.  Music abounds in this memorable work of love, joy, loss and memory where even beyond the grave the deceased do not cease to sing.

The collection concludes with ‘Night Music’ reminiscent of Denis O’Driscoll’s ‘Nocturne’.  We have come full circle.  Rilke’s circuit is complete and the poet has spliced his singular current into the grand scheme of things ‘some other music comes and goes’.  It recurs.

Tom Conaty is a poet, a primary school principal and an arts in education consultant. His collection ‘An Exaltation of Starlings’ was published by Doghouse in 2010. ‘Field House’ his next collection is due out 2017.

This entry was posted in News, Review. Bookmark the permalink.
Loading Comments...