Ndrek Gjini is an Albanian journalist and poet living in Ireland. He is author of books published in Albanian and English. He holds an MA in Writing from NUI Galway,  BA in Heritage Studies from GMIT and BA in Literature from University of Shkoder, Albania. During 2012-2013, he worked for Galway City Council as Arts Office Assistant. Currently he  works for the Galway Education Centre and is Managing Editor of  The Galway Review. 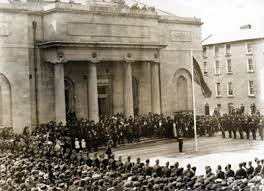 The birds are tweeting in the trees around the 200-year-old Galway Courthouse. Perhaps they just want to tell us summer has finally arrived. I stop for a few moments in the front yard of this fine stone building in the heart of Galway city. I light a cigarette and stand there, lost in thought. Opposite the Courthouse, only a few metres beyond it, stands another fine stone building. It is called the Town Hall Theatre. It is very similar to the Courthouse in its structure and, I think, in the function it performs. One can very easily get the impression that, because they have been so close to each other for many decades, they have done nothing more than copy and repeat each other’s shows. These strange thoughts make me light another cigarette.

While smoking my second cigarette the first crowd of people begin to arrive. They walk slowly through the front yard. Nicely dressed in black, in their hands they carry heavy folders. They stroll stately towards the door, neither smiling nor saluting anyone.

Less than 30 minutes later, another crowd of people appear. They are not very well dressed. They walk with hurried steps, talking loudly to each other and saluting everyone. They enter the building carelessly.

Gazing at the diverse crowd of people, and totally lost in my thoughts, time passes without me realising.  It is almost 10:30 am. So, I follow the last crowd on their way in. They are scurrying from one door to another, asking where their case is going to be held. They are shouting and swearing. The whole place is chaotic. I don’t know why, but my mind unconsciously starts to associate the word ‘court’ with the word ‘chaos’. After a few minutes, the administrative staff and the police officers start giving directions to everyone, trying their best to keep everything in order. And then everything returns to normal. Judges, lawyers and prosecutors, accused persons, witnesses, interpreters and journalists, all sit in their respective seats. The show begins…The show, which I think will be repeated some time in the Town Hall Theatre. The tales told here in the Courthouse have always been and will be the finest ‘food for thought’ for many playwrights. So, in this sense, the show that just began here will be ‘translated’ at a later date in the Town Hall Theatre opposite. It is as if the theatre stands so close, looking forward to these tales, ready to rewrite and put them on stage.

Although I have been working as a freelance interpreter for a good few years, I know very little about how the Irish Court system is structured and divided. Words such as ‘circuit court’, ‘criminal court’ and so on, are not very familiar to me. However, in order to meet the requirements of an assignment I have to write, I did some research last night on the history of this building and on the Irish Court system. Yet, today I feel like those scenes, with the crowds of people and tales that are being told here, in this stately stone building, have been nearly the same for almost 200 years.

For years and years, the first crowd has always arrived earlier to this building than the second. The first crowd always arrives nicely dressed, solemn, and glum, followed by the crowd of ‘sinners’: dirty, loud and edgy. For the past 200 hundred years, here in the Courthouse, time, people, and their ‘sins’ have been repeated again and again, in one or another form, perpetually, like a show. And I think will be perpetually copied and repeated in an art form, at the Town Hall Theatre, just a few metres away.

It is unique to find these two fine buildings standing so close to each other; each staging tales about how honest, frank and truthful folk have been insulted by sinners, fraudulent and dishonest people. There is no other place in world that the Courthouse and the Town Hall Theatre could be just a few metres far from each other.

Thus, I think the Heritage Office in Galway City Council should advertise them as one of Ireland’s wonders.